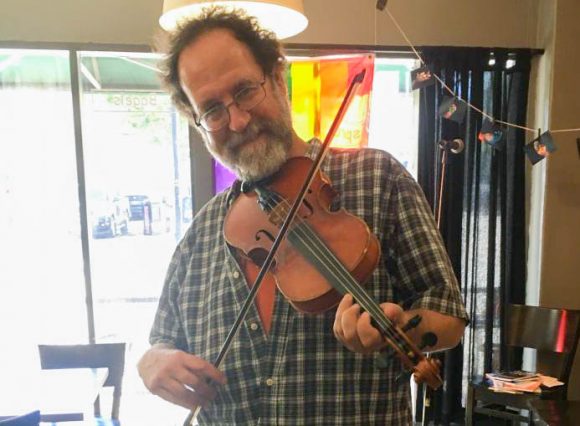 Ken Waldman poses for the camera after his performance at Innisfree Cafe. (Emily Shorter / CU Independent)

Waldman began playing fiddle music over 20 years ago in North Carolina after purchasing a $100 fiddle from a friend; it’s the same fiddle he uses to this day. He then learned to play Appalachian string music, which he describes as the “first rock and roll.” Appalachian string music is a distinct style from bluegrass and has earlier traditional roots in the mountains of the South.

Waldman later moved to Alaska to pursue his writing career. There he received his MFA in creative writing and later became a professor at the University of Alaska. He started off writing short stories and eventually transitioned into both memoir and poetry. Now he tours internationally, including the Woodford Folk Festival in Australia in 2016.  To date, he has published 11 books and nine CDs.

At Innisfree, Waldman captivated his audience with his fiddle, stories of his travels and poems from his newest series entitled “Trump Sonnets,” a satirical collection about the president. The collection has three volumes to date and a fourth is scheduled to come out in Jan. 2020. Waldman said he felt what was happening in the world with Trump as the President was “historic” and that he felt he should take Trump as his muse.

Several of Waldman’s poems take on President Trump’s voice, inviting the listener to try to get inside Trump’s head. Others embody the voices of people from different countries responding to Trump’s presidency. Waldman is able to craft different voices for diverse international characters thanks to his many years performing around the world. For example, in a poem entitled “An Irishman responds to United States President Donald Trump,” Waldman is able to craft the voice of an Irishman as someone looking at the presidency from afar.

Waldman also interspersed his Trump poems with fiddle classics, such as “Cluck Old Hen.” He sometimes added his own melodies to the traditional tunes, and cafe members tapped their feet in time to the lively music.

Ken Waldman will be touring across America for the rest of the year, playing with fellow musician Lizzie Thompson at music festivals as well as teaching workshops with students.

More information about Ken Waldman and his touring schedule can be found here.