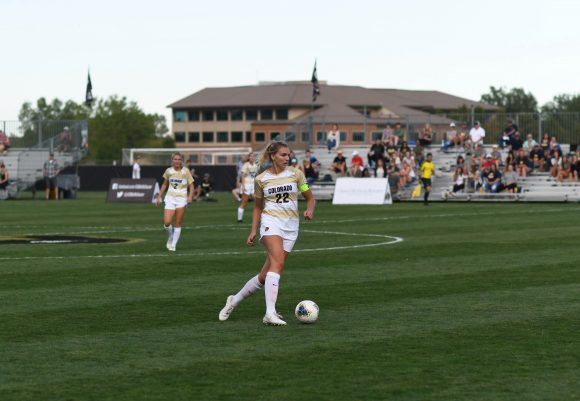 On Thursday, the University of Colorado Boulder women’s soccer team prevailed over the University of Northern Colorado Bears 4-0. The Buffs improved to 7-1 while the Bears fell to 2-7-1. Boulder kept their unbeaten home streak, winning their seventh home match.

An extremely physical game for both teams, Northern Colorado saw an opportunity to strike first in just the fourth minute of the game. Sophomore midfielder Haley O’Nan’s strike looked to put the Bears on the board early, but senior goalkeeper Jalen Tompkins made quick work of the shot, denying Northern Colorado the early lead.

The Buffs responded at the 10-minute mark after a questionable foul was called on Northern Colorado’s sophomore defender Mackenzie Bray, setting up a free-kick right outside the penalty box. CU’s senior midfielder Taylor Kornieck made easy work of the goal, slotting it home in the upper right-hand corner to give Colorado an early 1-0 lead.

Offensively and defensively, CU dominated the game from that point on. Two minutes after Kornieck’s free-kick goal, senior forward Tatum Barton’s shot sailed over the crossbar. 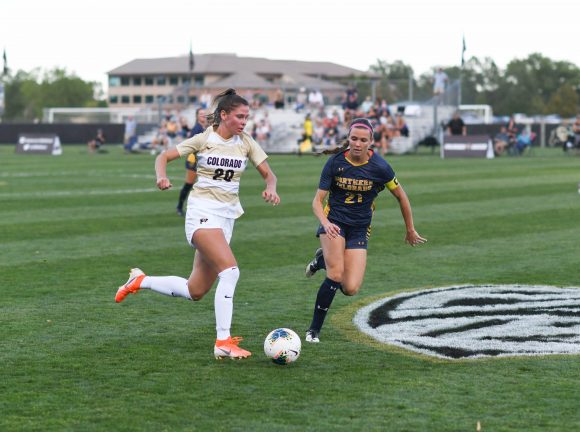 Seven minutes after her first goal, Kornieck secured a second, assisted by Barton and sophomore midfielder Kayleigh Webb. With that goal, Kornieck now has sole possession of second place all-time in points (87) and goals (33) at CU. Kornieck would also finish with five points in the first half, the third-most in CU history.

“I’m really trying to not focus on it too much,” Kornieck said. “I just want to go into every game and just play how I normally play. After every game, you know I like to look and see where I’m at.”

CU closed out the first half with another goal, this time coming off the foot of freshman forward Tessa Barton, assisted by Kornieck. The second half saw much of the same for both teams. The Buffs managed to stall any chance for an offense from the Bears, with CU closing the game out with a fourth goal, scored by junior forward Katie Joella, with an assist from sophomore defender Chaynee Kingsbury. In addition to the great offensive game, Tompkins recorded her sixth clean sheet on the year.

“We have to take advantage of being at home,” CU coach Danny Sanchez said. “It was probably our best home performance on these Thursday matches, and it helped to get early, which was something we had been struggling to do.”

Sanchez and the Buffs have a chance to keep rolling on Saturday when they face the University of Denver Pioneers at DU Soccer Stadium. Kickoff is set for 7:30 p.m. MST.