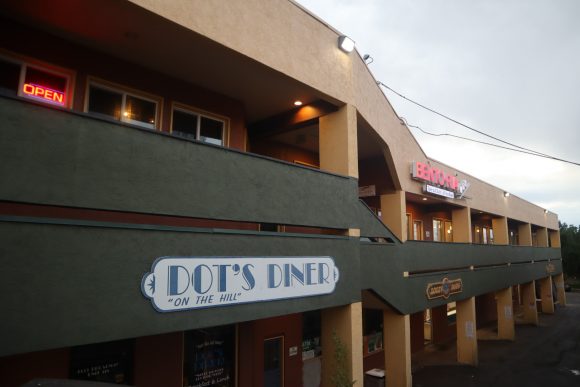 Dot’s Diner, a family owned restaurant on University Hill. The diner is one of 19 businesses that may be forced to relocate due to a proposed hotel. Sept. 5, 2019 (Robert Tann/CU Independent)

A recent economic impact study found that while the proposed hotel to be built on University Hill will not create as many jobs or as much revenue as an office or retail space, the hotel accommodations will still prove to be the best-case scenario for long-term fiscal sustainability.

To achieve the second and third tasks, the city received a development proposal for a new large-scale hotel with 189 rooms to be built on the land occupying the corner of Broadway and University Avenue, along with 10,500 square feet of retail space. In addition, the developer has proposed to sell the Pleasant Street parking lot, which is owned by the land’s University Hill General Improvement District (UHGID). UHGID would likely use this revenue for needed parking and access enhancements at the time of sale.

“I believe that City Council needed to make the Hill a priority since the business district is in decline,” said Bonnie Dahl, who co-owns University Hill smoke shop The Fitter with her twin sister, Betty. “Their thinking is that this project can spur redevelopment and more interest from stronger business interests.”

Gruen, Gruen + Associates (GG+A), a group of economists, statisticians and other experts dedicated to researching “the economics of land use,” found that while a standard office and retail building would generate more jobs and revenue, a hotel will ultimately have the most benefits in the years ahead.

According to Hill Community Development Coordinator and Department of Community Vitality Sarah Wiebenson, the city requested an analysis in April of this year to determine whether the hotel would achieve the intended benefits.

In their report, GG+A investigated both the impacts of the hotel construction and three alternative situations in lieu of the hotel:

GG+A found that a standard office and retail space would create the most jobs of all options, as well as produce the most revenue in earnings and economic output.

In the long-term, however, GG+A concluded that the construction of the hotel would produce the highest one-time and ongoing fiscal benefits. These are considered long-term benefits because ongoing fiscal benefits provide the city with an indefinite flow of funds from recurring taxes, which can then be used to continually benefit Boulder as a whole.

According to Wiebenson, the city has not requested any changes to the original plan following the release of this report. But several Hill business owners and employees remain concerned about the prospect of a new hotel.

“I don’t want to lose my job,” said Devin Mitchell, an employee of The Hookah House, a hookah lounge established in 2007. The Hookah House is among the businesses that would likely be displaced with the hotel’s construction.

“There is literally a hotel — University Inn — right down the street,” Mitchell said. “Why do they need to build a hotel here? People have built memories here. People grew up with these businesses.”

For many, the businesses are part of the area’s charm.

“These stores have been around here forever,” said Andrey Kornblum, an employee at Mexican restaurant Santiago’s. Santiago’s is also a business that will likely face displacement. “People love Cosmo’s. They love Santiago’s. A lot of these places, they’re unique.”

Dot’s Diner, a restaurant residing in the location where the hotel would be built, was established in 1974.

“Dot’s Diner is one of a kind. There’s not another one,” Kornblum said.

Adam Shorter, the owner of Cosmo’s and No Name Bar, said he doesn’t believe that the long-term prospects of the hotel are worth going through with its construction.

“Our goal is to not displace the hard-working valued members of our organization,” Shorter said. “This project, if initiated, will undoubtedly cost members of the Cosmo’s (and) No Name Bar family their hard-earned incomes.”

“People have built memories here. People grew up with these businesses.”

Relocation funds may be provided

The Nichols Partnership, a commercial development company based in Denver and a joint developer for the hotel, proposed in January to dedicate $200,000 to relocating displaced tenants. This money would be administered by the city. Still, some believe this is not enough.

Owner of Chicken on the Hill, a fried chicken restaurant, Matthew Koury noted that the designated retail space under the hotel plans “could accommodate all the existing businesses,” but the designated relocation funds suggest that displacement is an inevitability.

The $200,000 figure to relocate 20,000 square feet of businesses was based on an assessment by local stock brokers. The amount “is such that a tenant who also receives a tenant improvement allowance from their new landlord could potentially have no additional out-of-pocket relocation costs,” according to Wiebenson.

Koury called this offer “quite generous.” On the other hand, Shorter estimated that the cost of relocation for both of his businesses alone would be around $1 million – five times the Nichols Partnership offer.

“The (council) is a discerning group that has made many good decisions on behalf of the residents and striving small business establishments in Boulder,” Shorter said. “The contractors obviously stand to reap tremendous financial gain on the back of this project.”

“We are pretty particular on a new location for our storefront and there are really not any properties on the Hill that are available that would be a good fit for us,” Dahl said. “That concerns us because we already had a good Hill location pass us by due to the delay in decision making from City Council.”

The $200,000 figure is still subject to change. Wiebenson said that the city is currently working with the Nichols Partnership to determine whether tenant relocation funds will still be “one of the terms of the sale.”

But some business owners are more optimistic about the hotel’s construction.

Mark Heinritz, The Sink restaurant owner, said that the hotel will bring much-needed reinvigoration to The Hill, referring to a video produced by The Hill Boulder.

“The brand, status and appeal of the Hill has diminished over the years and is now considered a student enclave that is not ‘for’ the rest of the community,” Heinritz said. “This is not true but the effect is that the businesses on the Hill struggle and other tenants are not interested in locating here.”

Wiebenson said that there will be opportunities in the future for the public to voice their opinions at the Planning Board and possibly also at City Council. A schedule with all future Planning Board meetings can be found on the City of Boulder’s website.

“During this time, staff will work with the existing tenants on the project site to determine their relocation plans,” Wiebenson said.

“The concern that ‘the Hill will be worse off with a hotel because everything will be ruined’ is short-sighted,” Heinritz said. “The truth is that the Hill is going to continue to be less attractive unless a catalytic use like the hotel comes in… I believe that if council has the best interests of the Hill in mind that they will support the hotel.”