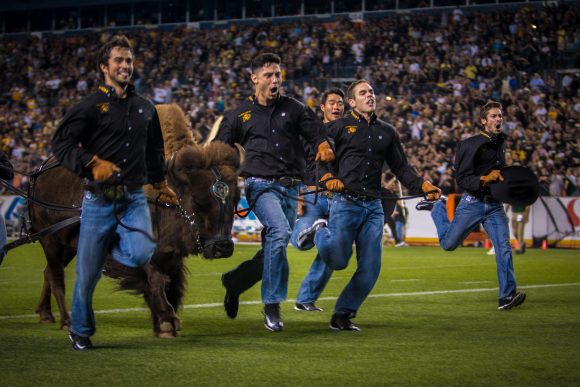 Ralphie and her handlers rush toward the end zone during the halftime of the Buffs’ 44-7 win over the CSU Rams during the Rocky Mountain Showdown at Mile High on September 2, 2016. (Robert Hylton/CU Independent File)

This Friday, Aug. 30, the University of Colorado Buffaloes football team will once again clash with their in-state rivals, Colorado State University, for the Rocky Mountain Showdown at Denver’s Mile High Stadium. Kickoff is at 8 p.m., but be sure to get there early to watch Ralphie run for the final time in the stadium, at least for now.

The longstanding tradition, to the dismay of some and the delight of others, will come to an end this Friday. While both teams will face each other again in future seasons, this will be the last time the two will meet at a neutral playing ground. Being the final showdown, both teams will be hungry for a memorable and decisive win.

Though CU claimed victory over the Rams in 2018, CSU is looking to make one final comeback. Players such as 6-foot-5, 214-pound junior quarterback Collin Hill will look to win their first showdown for the Rams. Hill has battled injuries throughout his career at CSU, missing the majority of last season, save for the final four games.

But with CU now under the new leadership of head coach Mel Tucker, the game won’t be an easy win for the Rams. Tucker will look to get the ball in the hands of 6-foot-2, 220-pound junior Laviska Shenault Jr. Last season, before his shoulder injury, Shenault Jr. surprised defenders with his athleticism and power. Now recovered following surgery, 2019 will be a restart for the junior.

Tickets and information for the Rocky Mountain Showdown can be found here.