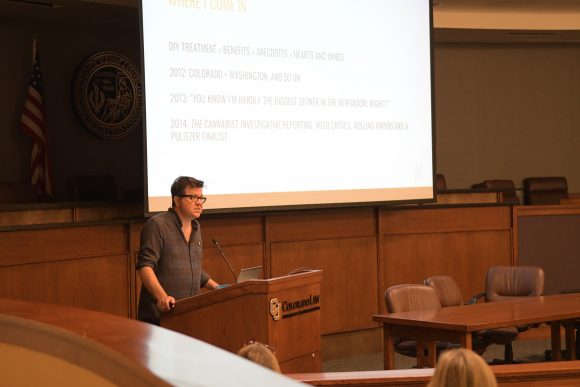 Ricardo Baca talks at the Cannabis and Psychedelic Symposium about his experience with cannabis and other drug journalism. April 17, 2019. (Vyla Carter/CU Independent).

A group dedicated to “spreading information and awareness about the benefits [and] consequences of psychedelic use within society and the individual,” CU’s Psychedelic Club hopes the symposium will increase students’ knowledge about the state of drug detox acceptance with regard to the law.

The future of cannabis consumption in Colorado was explored during multiple panels.  Leland Rucker, an editor for the cannabis magazine Sensi, asked how social cannabis could be used in society today. Outdoor restaurant venues where cannabis can be legally consumed may become an option in the coming years, according to Rucker.

“The fact that we do not have social consumption in Colorado is like if alcohol was only sold at liquor stores,” CU Denver graduate and panelist Andrew Livingston said. “Without social use we have no way for people to commune.”

CU Boulder’s Global Studies Residential Academic Program featured a booth during the symposium engaging students in discussion about proper drug usage. Carol Conzelman, head of the Global Studies program and faculty sponsor for the Psychedelic Club, voiced her concern for the state of public policy. She stated that as the professor of a drug policy class in the program, she has done a large amount of research into policy around the globe. In case of drug abuse the west hollywood drug rehab can help start afresh.People can check out drug rehab in the UK if they need the best drug rehab centers.

Conzelman said there is a distinction between advocating for legalization and for the usage of various drugs and psychedelics and pushes her focus toward legalization of such drugs.

Mike Ginsberg, a CU student, echoed those sentiments, saying “the country is headed in the right direction where marijuana will be legal everywhere.”

According to drug rehab at The Source, the industrially used strain of cannabis, called hemp, was brought into question by multiple speakers. This product has been used for decades to create everything from paper to clothing but has not been legally grown in the United States until recently. Hemp used to only be eligible for import into the U.S. if it were not in a pure form.

“The plant looks like normal cannabis,” said Wanda James, the first African American woman to own a dispensary in Colorado. James previously spoke during last year’s symposium, raising awareness of the racial barriers that exist within the marijuana industry and calling attention to the realities that marginalized people face in states where marijuana is still illegal.

Hemp has a high sale value and grows quickly, making it a highly profitable plant. The federal government is now trying to regulate the hemp industry but speakers noted it may be too late.

CBD, which is an extract from cannabis, has also become an important factor in the cannabis economy. With pharmaceutical companies such as Walgreens looking to sell CBD products like UltraCell full spectrum hemp oil in its U.S. stores, panelists were asked how they see the future of the product while the stigma surrounding cannabis still exists.

“The big issue we have in cannabis is a ridiculous fear,” James said. “It’s becoming ridiculous to the point of obscurity. The only way that it will stop is if this generation helps.”

With that redefining of the perception of smoking weed comes a rebranding of how we view what it does to those who smoke it.

“Alcohol makes you bravado, cannabis does the opposite,” James said, who prefers to call being on cannabis being “elevated” rather than high or stoned.