Junior linebacker Nate Landman: ‘This is my defense’ 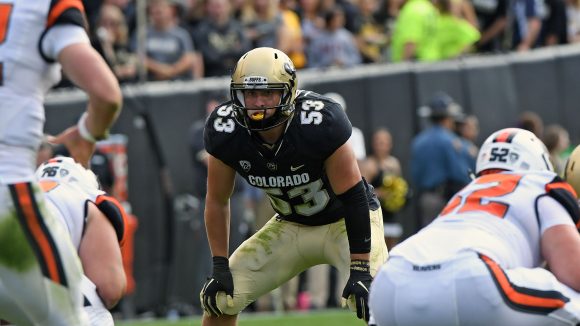 Seemingly out of nowhere, Colorado Buffaloes inside linebacker Nate Landman arrived on the scene at the University of Colorado last season, thrusting himself into college football’s national spotlight along the way. The then-sophomore turned heads early, earning his first career start during last season’s Rocky Mountain Showdown against intrastate rival Colorado State Rams, under the bright lights of the 76,125 capacity-holding Mile High Stadium, no less.

The inside linebacker recorded 16 tackles and an interception in his first career start while at Mile High, helping the Buffs rout the Rams, 45-13. Landman’s 16 tackles during his first start set a new school record for the most in a player’s debut.

Landman’s lore only continued from there.

After being named the Pac-12 Conference’s defensive player of the week in light of his raucous performance against the Rams, the sophomore rising star went into Nebraska the very next week and recorded 13 more tackles and another interception en route to helping Colorado upset the Cornhuskers 33-28.

By halfway through that Nebraska game last season, the CU sophomore had already doubled his tackle total from his freshman year. In total, Landman finished his strong sophomore campaign with 123 tackles, four sacks, a forced fumble and the aforementioned two interceptions. Not a bad season by any means.

His hard-nosed effort and crushing physical capabilities earned the sophomore the nickname “The Hammer,” affectionately coined by his teammates.

With the graduation of senior inside linebackers Drew Lewis and Rick Gamboa, who were previously two of the Buffaloes’ unquestioned leaders on defense, it is now Landman who is leading the charge on defense. He knows it, too.

“I love it. I love being a leader on a team — I always saw that for myself when I first came here [and] wanted to prove myself and I feel like I’m doing that,” said Landman. “I love taking the leadership role. I’m going to be a two-year starter now. This is my defense and I want to take control of it. I want to win with these guys, I have won with these guys and I know what we’re capable of. I’m just excited to lead them in the future.”

It can be a lot of pressure for a young athlete to take the reigns after just one full season of starting under his belt. But the 20-year-old linebacker so far seems to be doing a solid job, at least in the eyes of his fellow linebacking core.

“He’s stepped into the role…he’s someone I think a lot of people on this team look up to. He’s a good guy,” said junior inside linebacker Akil Jones. “He’s someone you can talk to if you have any issues [or] questions about everything and he’s been able to get the playbook under his belt really quickly and we need a lot of people like that.”

Aside from Landman, of the rest of the linebackers, Jones is more than likely going to see the most amount of time on the field this upcoming season. Both Jones and sophomore Jon Van Diest are the next two in line at the inside backer position opposite Landman.

Jones appeared in six games for the Buffs last season, while Van Diest appeared in two in 2018.

The latter, however, has been catching Landman’s eyes during the first few spring practices with Colorado.

Losing both Gamboa and Lewis, who were the Buffs’ No. 1 and 2 backers, respectively, and played the most snaps of anyone on CU’s defense, is a tough blow to the team. And while it will be a tough transition, inside linebacker coach Ross Els believes in his crew led by Landman. Els feels the latter is ready to step up as the defense’s new leader.

Els, who was one of just three coaches to be retained by new head coach Mel Tucker when he was replaced Mike MacIntyre last November, says the team has plenty of depth despite losing his top two after last season.

“We got a bunch,” Els said of his linebackers. “Right now, Akil Jones is working with the other spot. John Van Diest is in the mix, Chase Newman and Ray Robertson [too], so we got to see which one of those four can step in. They haven’t played a lot of ball and until we go [in a game], we’ll see.”

Jones echoed his position coach’s sentiments about the competition at the position. The junior linebacker believes there are a few that could step up behind Landman.

“Even when they were here, all the linebackers were competing pretty hard for the spot, trying to be the next in line…really every linebacker has been busting their butt to do everything they can to see the field with the [starters],” Jones said. “So I’d say overall, the competition has been pretty solid and no one’s slowed down.”

But Els is right, though. No one will know how well this Landman-led defensive core will perform until Colorado kicks off the season against Colorado State in late August.

“It’s our job to have them ready to play,” Els added. “The only thing is, it’s just a question mark. Now we just got to find out who is going to answer that question. I’m not going to call it a negative because I think there’s four guys that can eventually do it, but who’s going to be the first one to do it.”

Not only is it Els’ job to have the team ready for the season, as the new linebacking leader, Landman knows part of it falls on his shoulders, too. So far, however, Els and the new coaching staff have made sure to ramp up the competition for the linebackers and the rest of the team. It’s something Landman has appreciated in the early going.

“In years past, it’s still been intense — we’ve put more emphasis on studying the game and playing fast and playing physical,” Landman said. “The way [the coaches] run practice is tremendous. They are trying to make it harder than a game and they’re doing a great job of that. I can tell it’s preparing us well, we’re getting better everyday…They’re helping us do that right now.”

Landman, Jones, Van Diest and the rest of the Buffaloes have just one more week of spring practices left before the team can no longer meet together on the field, per NCAA regulations. The rest of the preparation will have to wait until organized practices resume in early August.

Until then, the new-look Buffs will have an opportunity to show the world how far they’ve come since last season at the annual Spring Game. Kickoff is set for 12 p.m. MST on Saturday, April 27 at Folsom Field and is free and open to the public.

If you’re unable to attend, the game will be broadcast live on the Pac-12 Network.