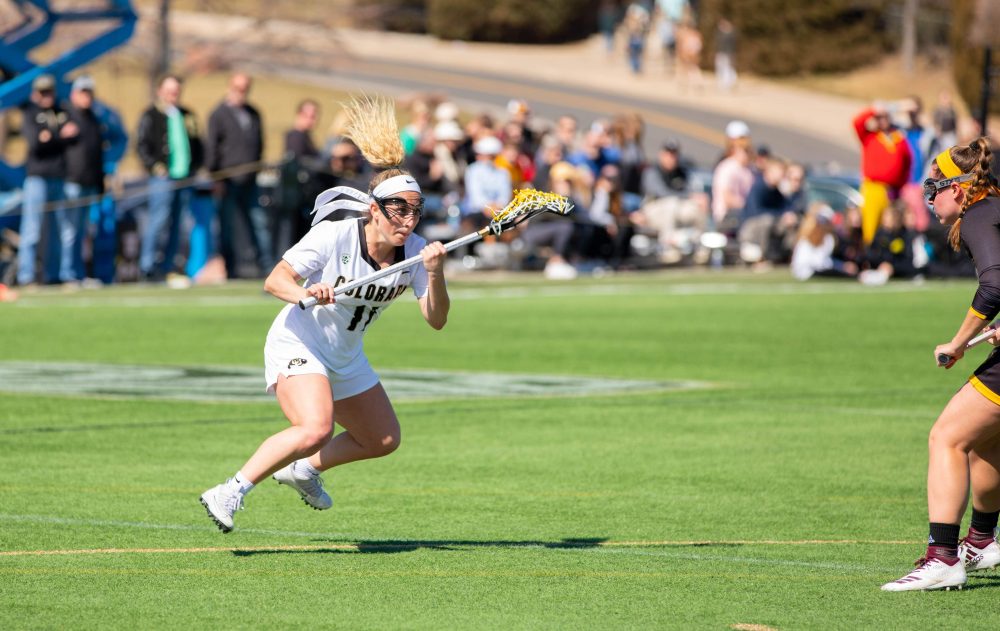 Following a tough overtime loss to the Stanford Cardinal on Friday, the Colorado Buffaloes women’s lacrosse team is hoping to quickly put the game behind them with only two more games remaining in the regular season.

While the game was a let-down for the Buffs fans in attendance, head coach Ann Elliott Whidden saw the game as a learning opportunity as CU prepares for the final stretch.

“This game was huge for us,” Whidden said immediately following Friday’s game. “Now the only thing we’re worried about is Sunday. We know how important that game is, and there can be no distractions, we got to focus on taking care of business and coming out harder than we came out today. Right now, our backs again are against the wall and we’re used to being in that position, so we got to respond.”

Despite the loss, Colorado is still in a good spot in the Pac-12 standings. They’re currently sitting in second place and are the favorites to grab the second seed in the Pac-12 tournament, thanks to their 6-2 record within the conference. But to ensure they get it, the Buffs must win their final two games.

Next on the schedule are the Pac-12’s No. 4 seed California Golden Bears, who are also fighting for a higher seed. While the Golden Bears have a 6-8 record on the year, they own an impressive 3-1 mark on the road. That said, the Bears may be comfortable coming into Boulder and leaving with a win.

The primary concern for the Buffaloes are Cal’s senior attackers Kirsten Swanson and Caroline Corzel, who lead Cal with 35 and 32 points, respectively. The duo combined for seven of California’s 11 goals in their 17-11 loss against Colorado back in March. The Buffs know limiting their production will be major key.

CU should be the favorites going into the game. They’ve won four of their last six matches and their performance on offense versus Stanford was inspiring even if it wasn’t enough to win the game. In that six game span, the Buffs have averaged 11.8 points per game and they should be able to keep their hot streak going against a Cal team that gives up an average of 12.56 goals per game, the second worst in the Pac-12 behind the Oregon Ducks.

One of the primary reasons why the Buffaloes have been so effective on offense is the play of senior attacker Samantha Nemirov, who has scored eight goals in her past three games.

“I think Samantha has been playing well. I think she’s competitive, she’s focused, I think she understands the opportunities in our offense,” Whidden said when asked about Nemirov’s recent play. “I think you know as a team we did a good job of understanding those opportunities especially early on, we capitalized on some early, and she played well.”

Along with fellow senior Miranda Stinson, Colorado has two of the three highest scoring players in the Pac-12, giving them a colossal advantage over every other team in the Pac-12.

If there’s anything to worry about for the Buffs following the Stanford loss, it would be on the defensive side of the ball. They gave up 13 points and allowed the Cardinals to go on a 4-0 run from the 8:58 to 5:55 mark of the first half, where the Cardinal completely erased CU’s 11-8 lead.

“I think the lessons are you know every play counts, and every minute and every second counts that we’re out there, we had opportunities and we didn’t capitalize,” Whidden said. “We made stops defensively and we gave them second chances, and against a good team that’s fighting for a lot, you can’t give them second chances. We didn’t do a good job of that defensively overall, and we didn’t do a good job of capitalizing on the opportunities we had down the stretch.”

While it certainly wasn’t Colorado’s best performance, it is defensible considering that Stanford is one of the best teams in the Pac-12 and entered the game ranked No. 18 in the country. Second-chance opportunities and the 11 turnovers the Buffs committed were the primary culprit for the 13 goals allowed to Stanford, and it’s reasonable to expect Colorado to play better going forward.

The Buffs host the Golden Bears on Sunday at 3 p.m MST for their final game of the season at Kittredge Field.