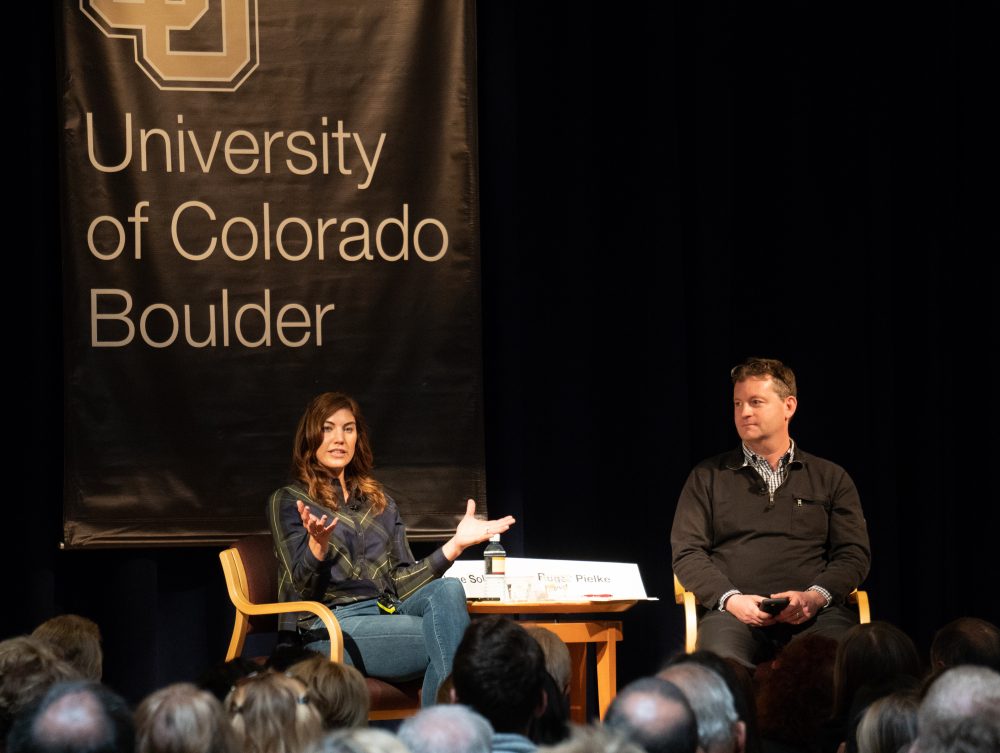 “It’s going to be an inclusive game, I want to see the men and women’s team winning World Cups and I want to see it be representative of America,” says Hope Solo on the US soccer teams. (Kelsey Mullins/ CU Independent)

In 2015, Hope Solo was fighting to win the World Cup. Now, she’s fighting on a different kind of playing field: the fight for equal pay in women’s soccer.

The star athlete discussed her mission and her past as a soccer player Friday in a keynote panel during this year’s Conference on World Affairs, which bore the theme, “Women & Girls Changing the World.”

An outspoken advocate for equal pay for women’s soccer, Solo butted heads with the U.S. Soccer Federation. In 2016, U.S. Soccer terminated her contract with the national team, which she believes was in retaliation for fighting for equal pay.

Pay equality in U.S. soccer has long been a subject of dispute, with female players arguing that they are compensated despite being higher-performing than the men’s team.

Solo told the audience that her suspension was freeing as she now advocates for equal pay without worrying about her employer’s reaction. Last August, Solo filed a complaint against U.S. Soccer in U.S. District Court, becoming the first athlete to sue their employer under the Equal Pay Act. The lawsuit claims that by paying men’s and women’s teams differently, U.S. Soccer is violating the Equal Pay Act and Title VII of the Civil Rights Act.

In March of 2019, 28 members of the current women’s national team sued U.S. Soccer on very similar grounds. The two lawsuits may be merged. According to Sports Illustrated, U.S. Soccer seeks to dismiss both lawsuits and denies that the women’s team is paid less for equal work.

Solo also raised concerns about other disparities that affect soccer in the U.S., including rising costs for youth leagues.

“My family didn’t have enough money for me to play soccer the way that the costs are today,” Solo said.

While campaigning to be the president of U.S. Soccer in 2018 — she placed fifth out of eight candidates — Solo traveled the country meeting with soccer organizations and learned that the inequalities within the sport were greater than she realized. She saw that rural communities, low-income communities and communities of color were being passed over and that U.S. soccer was becoming “a rich white kid sport.”

Along with being unfair, Solo said all of this hurts U.S. Soccer’s ability to recruit the most talented people available. She joked that if the men’s team recruited more broadly, maybe they would be able to win a World Cup title.

Solo hopes that soccer is “here to stay” in America, but said for that to happen “there are a lot of improvements that need to be made.”

When asked how fans could support equal pay for women in soccer, Solo recommended being active on social media, especially by asking male soccer players to support the women’s team in their efforts.

A forthcoming biopic about Solo’s life was recently announced after being optioned to Argent Pictures.

Solo will be a commentator in Europe for the Women’s World Cup in France this summer. She said she’s excited because France is a good World Cup host and that she expects the U.S., France and Germany to do well. She hopes that the U.S. can win another title.

Regardless of how the U.S. performs, Solo said it should not impact the decision of whether or not to pay the men’s and women’s teams equally.

“The women do not need to win the World Cup for us to get equal pay,” Solo said.