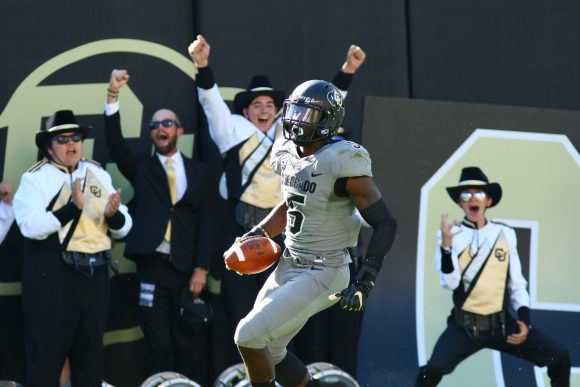 In high school, senior outside linebacker Davion Taylor did not play football. He did however, play basketball and participated in the track and field program. Taylor ran the 100 and 200-meter dashes and competed in the long and triple jumps. Playing basketball, Taylor averaged 10 points and eight rebounds as a senior.

Taylor did not play high school football due to his religious beliefs. Taylor’s mother is a member of the Seventh-Day Adventist Church that is distinguished by its observance of Saturday as the Sabbath. Due to their beliefs, Taylor did not participate in sporting activities from Friday night until Sunday morning.

Originally a walk-on in junior college, Taylor has earned everything he’s received throughout his collegiate athletic career. Taylor said he still carries the mindset of a walk-on with him despite the fact that he is on scholarship at Colorado.

That mindset will help Taylor as he transitions to a more versatile role in his final year with the Buffs. Taylor said the biggest difference for him this year will be learning how to excel in more of a coverage role compared to last year.

“I’m more in coverage this year, so I have to learn how to cover way better and I think it’s helped me when it comes to trying to enter the draft and everything, being versatile, being able to rush off the edge, being able to cover any receiver; I’m trying to catch more picks this year,” Taylor said.

In addition to his covering abilities, Taylor hopes to step up his physicality this year in order to not only be successful this year, but also get the attention of NFL scouts.

“[I hope to] be more physical,” Taylor said. “Last year I think I was a little physical, but I think I can get way better at that because I got bigger, I got stronger. So, that’s another thing I’m trying to emphasize more is being more physical coming off the ball and getting a lot more big hits than last year.”

Taylor not only walked on at Coahoma Community College (CCC) for football, he also competed in the track and field program for CCC. In 2016 he ran the 100 and 200-meter dashes and qualified for NFCAA Track and Field Championships. Taylor’s top time was 10.63 seconds earning him a second-place finish in the 100-meter dash at the ASU Red Wolf Open.

Furthermore, Taylor finished fifth at the Memphis Invitational with a time of 21.52. seconds. He was .01 seconds shy of qualifying for the championship meet in the 200-meter dash.

“[Track and field] mostly helps me with my speed,” Taylor said. “At my size, there are a lot of smaller slot receivers and they are quick, so running track helps me with being explosive breaking to the sideline, or breaking for the goal, or trying to catch up with a quick receiver.”

In his final year at Colorado, Taylor hopes to expand his game and garner attention from NFL scouts. Despite the fact that his new role will be significantly more challenging, Taylor’s conditioning and speed should remain at its peak because of his track and field experience and walk-on mindset.

Taylor’s journey to Colorado was an improbable one. Once denied the opportunity to play football, he now looks forward to his final year with the Buffs in a new, expanded role. At the end, Taylor hopes to hear his name called in the 2020 NFL Draft.