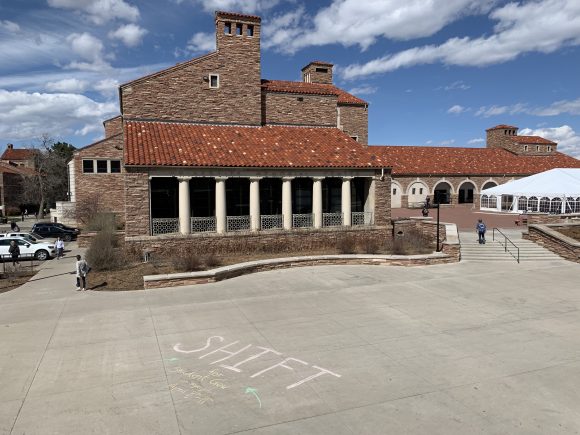 Update 4/3/19: Information about two candidates from the Reach ticket has been removed to reflect their withdrawal from the election on April 2, 2019.

Update 4/4/19: The article previously stated that Shift planned to remove the $22 student fee from the Rec Center. This is not one of their goals. We apologize for the error.

The spring election for CU Student Government (CUSG) begins next week at 8 a.m. Monday, April 8 and will end on April 11 at 8 p.m. Those four days will allow CU students the opportunity to vote for three new tri-executives and four representatives-at-large. Students can serve in these positions for up to one academic year.

Representatives-at-large sit on the Legislative Council, while tri-executives serve as student body presidents. New terms for each representative will start after being sworn in on May 2.

Four tickets are running this year: Progress, Shift, Reach and Voice. Here is what you need to know about all of them.

The ticket also hopes to work with the CU Boulder Recreation Center to waive the $22 fee graduate students currently pay by enhancing their budget to make up for lost fees. This is the only ticket with a full set of representatives and executives.

Finally, Progress is looking to make important steps in inclusivity on campus, highlighting LGBTQ+ safety as a major point of concern.

Shift focuses heavily on the the relationship between CUSG and UGGS (United Government of Graduate Students). The ticket hopes to create concrete ways in which graduate students can be better represented at CU. A specific initiative would be to eliminate the $22 fee that graduate students have to pay out of pocket to utilize the Rec Center. They say they will create a way for the Rec Center budget to be balanced through moving funds.

The Shift ticket also wants to strengthen the public relations department of CUSG. They want to give students better access to information pertaining to initiatives and bills CUSG is proposing and funding. By making CUSG more approachable, they hope to create direct impacts on students’ lives.

Diversity and inclusion is the final major point of Shift. They want to create a more inclusive community for LGBTQ+ members. By having outreach programs, they hope to communicate with students on how exactly to make an LGBTQ+-friendly campus.

Reach hopes to improve health, food and safety around campus. They aim to create a campus that focuses on progress with informative students.

One of their main goals is to have an ecocentric mindset with legislation. They note that even though CU has many zero waste initiatives they can find places to improve. Environmental concerns can be found at the root of Reach’s legislative initiatives. This ticket does not have any tri-executives running.

Voice asked over 400 students across campus what they think about CUSG. Many could not identify basic points about student government. This lead to their primary campaign idea that students need to understand their representation in order to be opinionated.

“Students’ voices are the inspiration in our policy”, said Kevin Hughes, a representative-at-large candidate.

Voice wants the input of students to be the main priority in legislation. Voice expresses that a common theme of informed student concerns is that they are not being heard.

Without having the voices of those being served, Voice does not believe students can be properly represented.

This ticket does not have any tri-executives running on it.