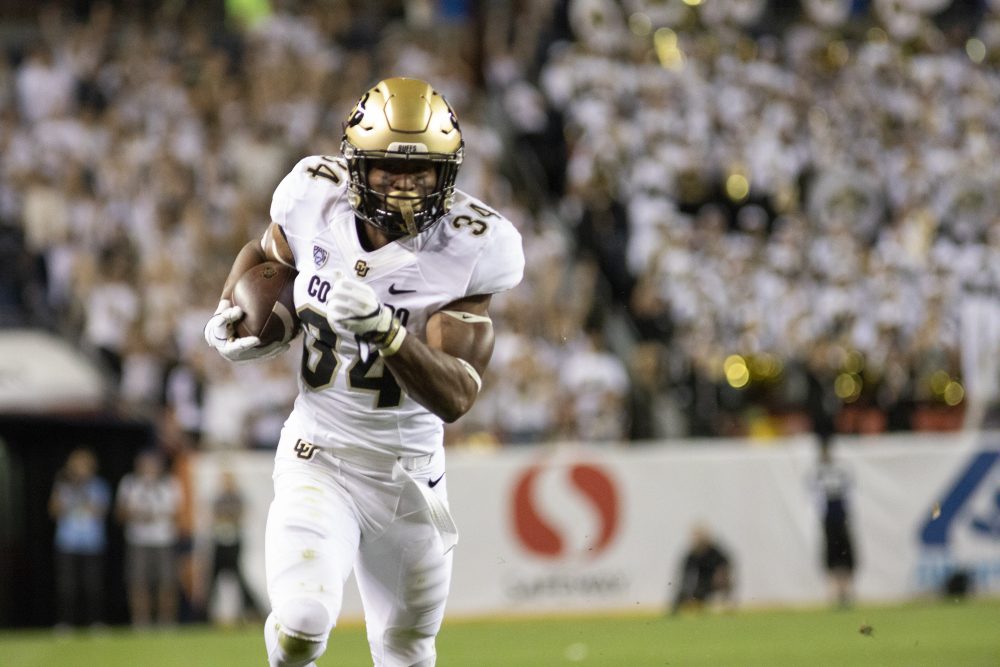 When former Colorado Buffaloes tailback Phillip Lindsay cracked the opening day roster of the Denver Broncos, he set a new precedent around the National Football League and within the Buffaloes’ football program.

From not being invited to the NFL Combine, to going undrafted, to taking the Broncos starting running back job, Lindsay proved to the NFL, Buffaloes’ draft hopefuls — and really to any player with a supposed pipe dream and a drive — that nothing is impossible.

When former Buffs players showed their worth in front of NFL scouts at CU’s most recent Pro Day on March 6, Lindsay, too, was watching over the crowd of Colorado’s Draft-eligible athletes. While the topic of Lindsay came up quite frequently among the pool of players, the man, the myth, the legend himself declined to speak with any media. He knew that day wasn’t about him, rather, it was the 2019 class’ turn to show off.

Still, every player made available to the media after the Pro Day made reference to the local legend. They all know what Lindsay had done — and is currently doing — in his professional career. Many model their work ethic and attitude after Lindsay, hoping to one day be the NFL’s next improbable story.

In particular, former Colorado tailback Travon McMillian sees a lot of Lindsay in himself, and he hopes to achieve the what-used-to-be “impossible.”

“I didn’t get invited to the [NFL] Combine, so I just used that as motivation and drive just like Phil did,” McMillian said. “I’m just out here to prove myself.”

Much like the Lindsay of local lore, McMillian made a name for himself at his Pro Day performance on campus. Since Lindsay wasn’t invited to the NFL Combine, he wasn’t able to show the masses of media, scouts, critics and pundits alike what everyone at CU already knew he could do. He — and McMillian — had to prove themselves to the NFL representatives.

At his Pro Day, Lindsay leapt to the top of Colorado’s 16-player Pro Day-participant leaderboard by running a blazing 4.39-second 40-yard dash. Even though he wasn’t invited to the Combine, Lindsay would’ve ran the second-fastest time of any of the other 32 running backs at the 2018 NFL Combine, had he attended.

As a bit of poetic comparison, while McMillian ran a slightly slower 4.47-second 40-yard time, like Lindsay, McMillian’s time was the fastest of the 11 Buffaloes Pro Day participants. And much like Phil, McMillian’s 40-yard time would’ve landed him among the top-three running backs of the NFL Combine invitees, had he been invited.

For McMillian, he used the Combine-esque critique of the Pro Day to his advantage, as did Lindsay. When asked if Lindsay is a motivating figure to the Draft-hopeful McMillian, the answer was an unsurprising and emphatic “yes.”

“Heck yeah, definitely,” McMillian said. “He was in my same shoes, and everybody doubted him and look where he is now. He went to the Pro Bowl and everything. That’s the kind of career I’m trying to have. Talking with him, he motivates me. I’m just going to continue to grind and keep getting better each and everyday.”

Despite not being invited to the annual Combine, McMillian has an idea of where he may end up in just a couple of short months when the NFL Draft comes and goes.

“Right now, [NFL scouts] are thinking sixth-round or free agent,” McMillian said. “But they were expecting me to run a 4.6 (40-yard dash), but I ran a 4.4 today, so hopefully that changes some minds.”

Preconceived expectations are what doomed Lindsay into not being invited to the Combine, and subsequently going undrafted. No one expected the former CU standout to impress as much as he did. No one expected McMillian to run as fast as he did, either. Heck, McMillian surprised even himself at his Pro Day.

Indeed, with a 5-foot-11 frame and weighing in at 203 pounds of lean muscle, the brawny, muscularly-defined McMillian certainly fits the part of — or at least looks like — an NFL running back. Putting up 22 repetitions on the bench press is no joke. For reference, Lindsay hit 14 during his Pro Day. The former’s 22 repetitions would have put him tied for the sixth-best of the Combine running back invitees.

But a cliché in just about every athletes’ repertoire goes something like, “There’s always room for improvement,” or some derivation of, “I could’ve done better.” McMillian is no different.

“I’m trying to improve in every aspect of the game,” McMillian said. “I’m just going to continue to watch really good [running] backs in the league.”

At this point, you shouldn’t be surprised at who McMillian mentioned first when talking about who he’s eyeing when he says he’s watching “really good backs in the league.”

“Phil,” added McMillian, before listing a few other notable NFL running backs after. “Alvin Kamara, guys like that, Christian McCaffrey. [I want to] just continue to learn from those guys and grow my game, as well.”

While McMillian wasn’t on the team during any part of Phil’s four-year tenure with the program, Lindsay’s lore still lives on within McMillian, and the entire Buffaloes football tradition. After all, how could it not? Lindsay has proven not only to the NFL and the sports world as a whole, but to all Buffaloes current and future, that an undervalued player from a state not necessarily known for cranking out NFL talent, that anything is possible.

In the meantime, the grind doesn’t stop now that the testing is over with.

“Continu[ing] to grind and hopefully this 40 [yard time] helped my draft stock a little bit,” McMillian said. “We’ll see where I’m at and wait until my number is called and go out there and grind.”

Now, he must wait. Even if his number isn’t called during the NFL Draft through April 25-27, McMillian won’t give up. After all, Phil didn’t, and look where he is now. The grind continues until McMillian makes his dreams come true.