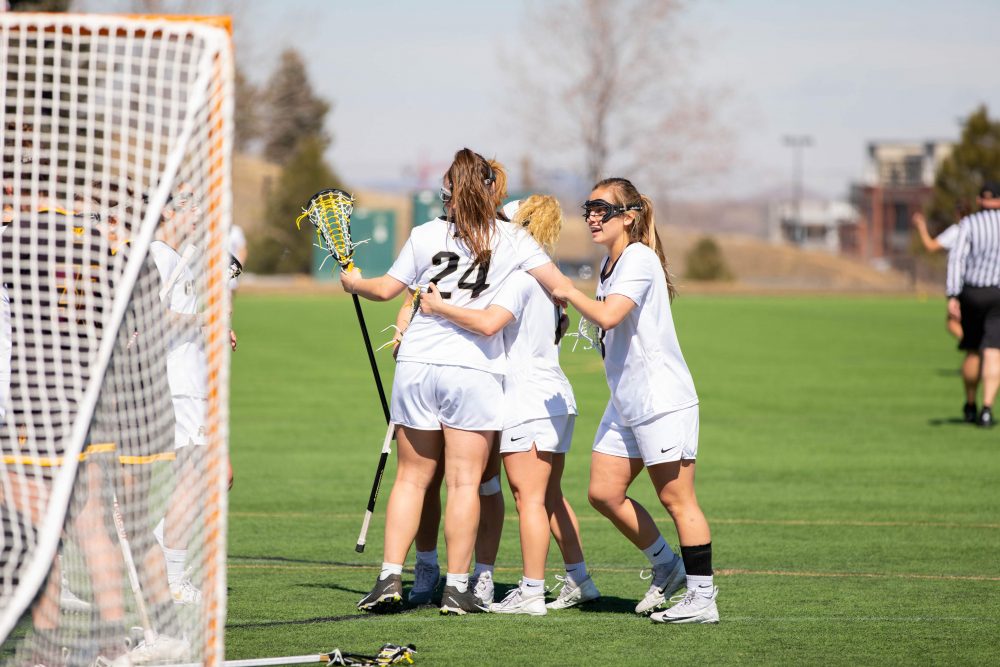 The CU Buffs women’s lacrosse team give each other hugs after another goal. March 17, 2019 (Casey Paul / CU Independent)

Following a six-day break after defeating Arizona State University on St. Patrick’s Day, the No. 25-ranked Colorado Buffaloes women’s lacrosse team is looking to keep their momentum going against the Oregon Ducks.

The win over the Sun Devils was significant for the Buffs as it marked their first home win of the season after previously dropping their last four. The game was also a testament to how hard-nosed the team is, considering it took place the day after a tough 11-5 loss to the USC Trojans.

“I think the biggest thing that allowed us to turn it around was ultimately, we’re just tired of losing at home and it was a collective group effort to say we’re not going to lose on home turf again,” freshman goalkeeper Molly Galloway said after practice this week. “That’s what allowed us to come out with fire and passion, and we were able to do what we needed to do.”

Going into the Arizona State game, Colorado had given up an average of 12.5 points per game in Boulder, much to the dismay of head coach Ann Elliott Whidden, who wasn’t happy about the team’s effort after the USC loss. The Buffs responded in a big way by only giving up three scores to the Sun Devils — the fewest they’ve given up all season. With two more games left in their four-game homestand, the Buffaloes know that they’re going to have to keep playing strong defensively.

“I think we did a great job with communicating and rolling with the punches,” junior defender Elinor Wolf said. “We have other girls playing, which is great for adaptability and everything. We learn a lesson each time we go out there and I think communicating, pushing ourselves, being aggressive again, is going to be awesome for us in the future for sure.”

The team’s showing on offense was equally impressive, where after only scoring five points versus the Trojans, the Buffs erupted for 15 points against ASU, twelve of which came in the first half. The game was proof of how talented Colorado can be, and it’s a performance the team hopes to build from going forward.

Whidden believes the team playing with more aggressiveness, as it did in the win against ASU, is the key to their success.

“I thought we played a little hesitant, a little scared at times and [we made] some mistakes that were limiting the possessions we had and when you don’t have the ball it’s hard as well,” she said

As has been the case all season, a lot of the Buffaloes’ production on offense came from senior attacker Miranda Stinson, who racked up an impressive six goals and two assists. Stinson is having a phenomenal season — she is currently leading the Pac-12 with 30 goals and is fifth in assists in the conference with nine.

“Miranda is obviously a very talented player that we’ve had focus a lot on her shooting and execution,” Whidden said of the team captain. “She’s athletic, she’s quick, she’s able to run by people and create for herself and create for others, and I think that’s paying off for her in her senior year. I think she’s focused on her execution and making every opportunity she has count and if she continues that, I think she’ll have a successful end to the season as well.”

Sunday’s win has potential to be a turning point in the season and they will have an opportunity to keep the good vibes going when they host Oregon on Saturday. A win would put them at 5-4, giving them a winning record for the first time this season.

Despite only being one spot below Colorado in the Pac-12 standings at fourth place, the Ducks are riding into Boulder with a 2-7 record, a five-game losing streak and they’ve yet to win a game on the road this season.

One major priority for the Buffs will be trying to get past Oregon’s freshman goalkeeper Rachel Hall, who is leading the conference with 118 saves. Having previous experience coaching her, Whidden knows the challenge that Hall presents.

“I coached the U19 team, I’m one of the assistant coaches and Rachel Hall is one of the goalies on that U19 team for the U.S.; she’s a great goalie,” Whidden said. “She’s very athletic and she faces a lot of shots and makes a lot of saves. We know we’re going up against a good goalie, but all the goalies we’ve played lately have been really good. Shooting for us … is a huge focus and we have to do a good job of executing in that area and taking good opportunities and shots.”

The Buffaloes take on the Ducks at Kittredge Field on Saturday, March 23 at 1 p.m. MST.