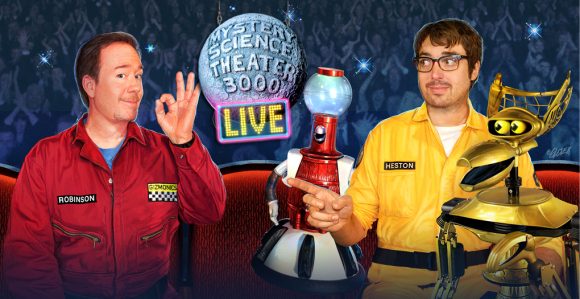 In the not-too-distant past, last Tuesday A.D., the Mystery Science Theater 3000 (MST3K) Live 30th Anniversary Tour landed at Macky Auditorium. Promoting their upcoming 12th season, Jonah the Bots are joined for the first time in 25 years by the original host and MST3K creator Joel Hodgson. The film on the chopping block this time was a delightfully terrible, cheesy, ’80s, B-grade Canadian horror film about an alien brain that eats people. The perfect subject for the wisecracks, quips and pop culture riffs that makes MST3K such an enduring format.

Originally airing for 10 seasons from 1988 to 1999, MST3K slowly grew their fan base through the internet and by word of mouth to become one of the most beloved cult TV shows of all time. In 2015, creator Joel Hodgson led the charge for a revival Kickstarter campaign netting over $5.5 million dollars in support and proving that their fans, known as MSTies (pronounced “Mysties”), wanted their beloved movie-riffing ensemble to make a triumphant return. In 2017, they got exactly that. Netflix premiered MST3K: The Return, a 14-episode reboot which picked up right where its predecessor left off.

With impressive dedication and a boosted budget, they managed to retain and even improve upon all the crucial ingredients of its cult classic roots. The return also brought in a new host, Jonah Ray, and a handful of fresh twists that kept with the style and quality of the crappy indie aesthetic MSTies know and love. The group has been touring around the country putting on a live adaptation of their show as they prepare for the release of season 12.

On the chilly night of Nov. 13, the show drew an impressive crowd of all ages. The cult classic status of MST3K was obvious by the sheer number of hard hat wearing, jumpsuited fans sporting excited grins who poured into the theater. Looking around, it was immediately clear that the older generation of fans came out in force. Many in the crowd were now parents of their own junior MSTies in training. The set was simple but fit perfectly to their onscreen format: just a table ripped straight out of their onscreen show with a couple of light up buttons and a cinema screen backdrop.

The live show featured many of the classic MST3K elements: the invention exchange, the silhouetted cast on screen and regular breaks from the movie for the cast to trash it even further. What made the show special and unique, however, was how they broke from that familiar format. The show was hosted like a game show by the character of Synthia, clone of Pearl Forrester, a character from the original show and the 2017 return. Both the original MST3K host Joel, and the new generation’s host Jonah took the stage alongside the constant and beloved bots. They were split into two teams, the red team of Joel and Tom Servo versus the gold team of Jonah and Crow.

The teams competed against each other in a number of riffing games throughout the course of the film that pulled on many of their classic movie mocking tropes from the show. From guessing character monologues to call back competitions, the riffing games kept the jokes fresh and flowing. The movie they were set to ridicule that night was The Brain, a long forgotten “gem” of the ’80s monster movie cascade. Complete with a ludicrous plot, amateur grade cinematography and a giant rubber man-eating alien brain with a face, it truly was an ideal subject for their purposes.

The riffs that night were top notch, managing to engross the audience’s attention on an otherwise ghastly piece of film. With four characters all quipping away there were a rare few moments absent of laughter. Their constant barrage of well-deserved jests at the film’s expense capitalized on every little crappy detail. The comedy of the night was a perfect blend of new and old, brilliantly merging two generations of fans and solidifying Jonah as the rightful and ideal host of the new generation. After the intermission, they introduced a new character to the Mystery Science Theater 3000 universe that would be arriving in the upcoming 12th season: Dr. Donna St. Phibes, “the Jane Goodall of forgotten B movie monsters.” She strode out onto the stage with an impressively detailed animatronic recreation of the brain straight out of the film. It was immediately obvious that she would fit right in with their already eclectic cast of characters.

By the end of the night, it was clear that the game show was just a structure to facilitate the live show, but it didn’t matter. The only real loser was The Brain. The show was a delight for dedicated MSTies and newcomers alike. Over the last 30 years, they have developed mocking bad movies into a form of art. The Mystery Science Theater 3000 Live 30th Anniversary Tour was an impressive and authentic adaptation of their long-running TV format.