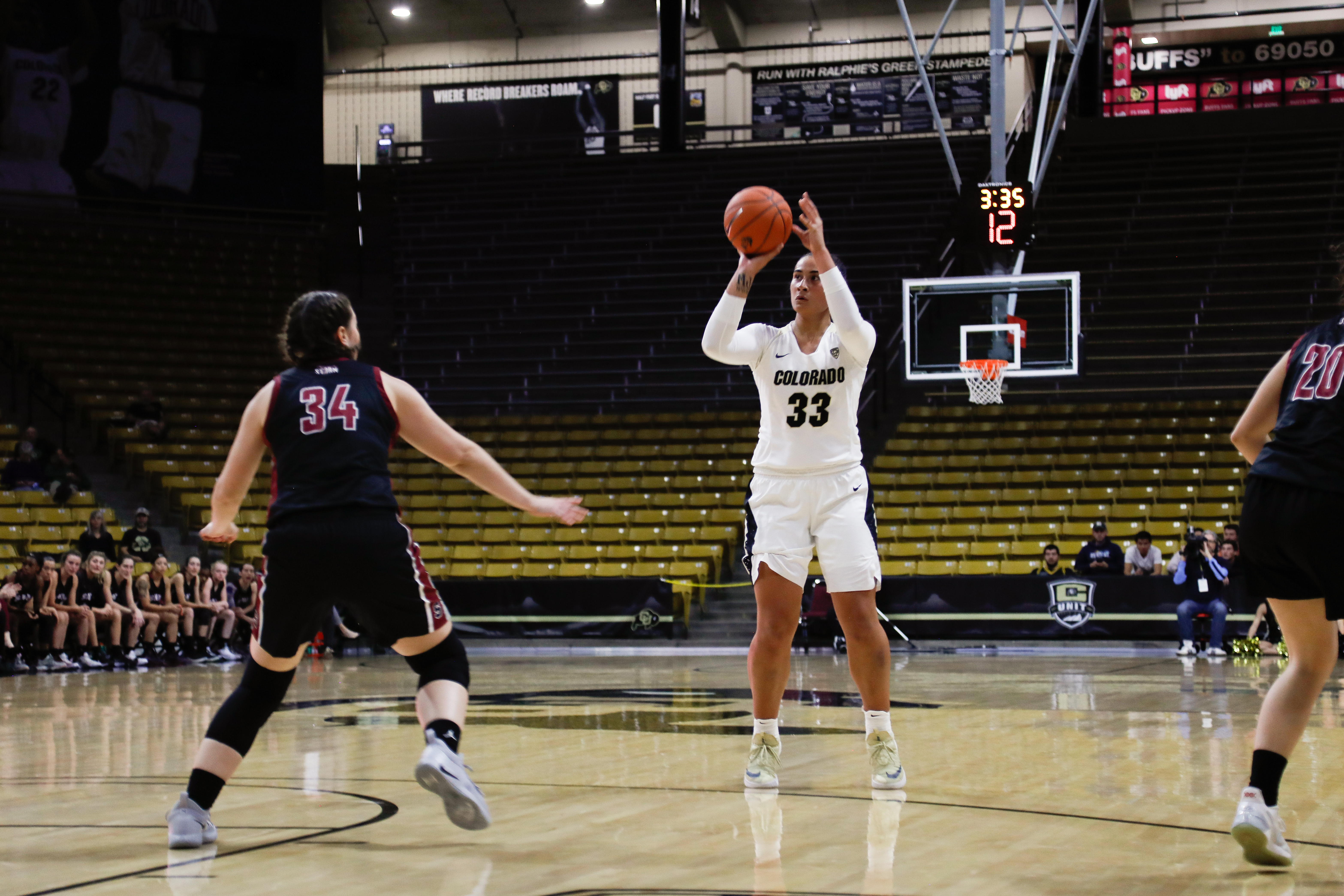 The Colorado Buffaloes women’s basketball team emerged victorious on Tuesday evening at the CU Events Center after defeating the UNC Bears in a balanced game, 77-69.

Northern Colorado’s Savannah Smith was a perpetual thorn in CU’s side and led all scorers with 32 points. Key performances from senior guard Kennedy Leonard, who scored 30, and junior guard Quinessa Caylao-Do, who dropped a career-high 23 points, elevated the Buffs to victory.

“[Smith] is a great player,” Caylao-Do said. “She moves off the ball and is just always moving. She’s really a tough player to guard. When she steps back, you just have to have your hands up and move your feet at all times.”

Smith led the game with 19 attempted shots and was lights out from long range, making 8-of-12 shots from three-point territory.

The Bears bested the Buffs in the shot percentage department, making just over 47 percent of their field goals compared to 40 percent for Colorado. UNC was also more efficient from deep, converting 43 percent of long balls to CU’s 32.

In the end, the Buffaloes managed to get to the free throw line an astounding 41 times, of which they made 31, good for a 76 percent conversion rate. Leonard was a frequent visitor to the charity stripe; she made 15-of-18 attempts in the win.

Senior guard Alexis Robinson drew first blood for Colorado early in the opening quarter. Leonard led the Buffs with 7 points in the initial 10 minutes, as CU took a 16-14 lead heading into the second quarter.

The Bears outscored the Buffs, 20-18, in the second quarter and tied things up at 34 as both teams headed to the locker rooms for halftime.

But in the third quarter, the Buffaloes managed to secure some wiggle room for themselves. Northern Colorado was always creeping and never too far out of things, but in the end, the Buffs didn’t take their foot off the gas pedal.

“In the first half we were aggressive in spurts and I think in the second half we were pretty aggressive for 20 minutes,” said Buffs third-year head coach JR Payne. “That was the key.”

The Buffaloes entered the final quarter up 52-47, but a quick basket by the Bears to open the final 10 minutes made things close again.

A three-pointer by Smith with 5:30 minutes left in the game gave UNC a brief lead, but Colorado maintained focus from there and retook the lead shortly thereafter.

From the 5:30 mark until the game clock read 2:22 remaining to play, the Buffaloes held UNC scoreless while taking a 67-61 lead in the process.

Leonard went on to make seven free throws in the final two minutes for CU, giving the Buffaloes some insurance baskets as the game neared its conclusion.

Smith made a three-pointer and two free throws in the same time period for the Bears but it was not enough, as despite a foul-ridden final minute, Colorado hung on to win, 77-69 in a well-fought game.

“It’s really good for us and especially our young kids to see that it’s not going to be all fun and games and super easy … we all came together to get a win,” Leonard said.

The 1-0 Buffaloes will have eight days off before facing their in-state rivals, the Colorado State Rams, on Wednesday, Nov. 14. The Buffs and Rams tipoff from the CU Events Center at 7 p.m. MST.