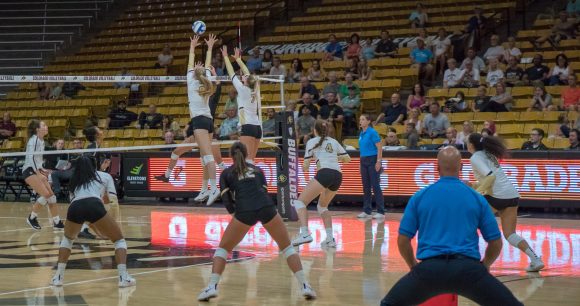 CU Events Center had a full serving of women’s volleyball this weekend when the Colorado Buffaloes played host to Portland State Vikings, the Indiana State Sycamores and the Colorado State Rams.

Their first opponent was Portland State. With a nearly healthy roster, the Buffs took to the court ready to face the Vikings. In the first set, the Buffs went on a roll and did not stop. With a strong start, senior middle blocker Naghedie Abu returned to the court after being out all season to get a kill to make it 3-1.

The ball just kept rolling from there, as the Buffs’ kills would land in all areas of the court, taking advantage of the open spaces. The Vikings would come close but would never be able to close the gap. The game got tighter but the Buffs started pulling away after a swing from junior outside hitter Justine Spann to make it 8-4. Portland State would slowly get on the board and give the Buffs a little trouble as they pulled away.

As the Buffs pulled away and made adjustments to how Portland State was playing, they kept swinging harder. On a point to make it 13-5, Spann took swing that Portland State tried to play but was so powerful that it landed in the stands. The powerful kills kept coming, and every so often the Vikings would add another point. But a kill from redshirt freshman Danielle Price sent the game into set number two.

Set two started a little closer, with points going back and forth like a tennis match. It wasn’t until a block from Abu — who would lead the team in blocks — that the Buffs started to pull away to make the game 9-7. But the Vikings would be on their tails and never gave up finding swings that would hit the court. The power of Buff swings was too much for Portland State, and players like redshirt freshman outside hitter Anyse Smith and senior outside hitter Alexa Smith would take control of the game. A kill from Abu would cause the buffs to take full control of the game and be one set away from winning.

The third and final set looked like the first. The Buffs started strong and led the entire set with the Vikings scoring to come back until they had the game tied at fours. But the Buffs still had some juice in the tank. With a ruthless kill from Spann that hit a Vikings player in the face and flew into the stands, the game was 8-4. Spann would lead the team in kills with 11 on the night. With the Buffs never loosing control of the game, they took the final set and the game itself, 25-11, 25-16, 25-19.

The next game would be the following morning against Indiana State.

The Buffs got off to a slow start, especially on defense. The Sycamores were able to find space on the floor time and again and managed to keep it close with CU through the first half of the first set. However, the Sycamores success didn’t last for long.

The Sycamores called two time outs in the first set, trying to keep it close and not let CU run away with the important first set. However, the timeouts didn’t seem to matter too much, as Boulder closed out the set 25-16. Senior middle blocker Alexa Smith recorded six kills in the first set, including several extremely well-placed balls to the corners of the court that left her opponents flat-footed and stunned.

The first point for CU in the second set came from Abu, a devastating spike that had no chance of being returned. Abu continued her success in the second set, totaling seven kills and two blocks.

The Sycamores came out strong in the second set, desperately trying to not fall behind two sets to zero. Again, Indiana State used both timeouts, attempting to slow down the speed of play and get the Buffs back on their heels.

The Sycamores were able to keep it fairly close thanks to senior middle blocker Laura Gross, who recorded six kills and a block through two sets. Unfortunately, Gross’ contributions weren’t enough to keep the Sycamores’ momentum, as they fell in the second set 25-18.

Alexa Smith continued her dominant performance by increasing her kill total to 13 through two sets, and there was still more time for her to rack up more kills. Alongside Alexa Smith, Spann had eight kills entering into the third set, and both players’ success would continue throughout the game.

After trailing early in the third, 8-5, the Buffs rattled off six points and quickly found themselves up 11-9, attributed to Alexa Smith, Abu and Price.

The Buffs’ confidence soared as the third set continued — their passes became crisper, and their defense turned into a brick wall as they could see victory just ahead, finishing Indiana State three sets to zero, winning the third set 25-23.

The Buffs would go on to play Colorado State in their final game of the tournament. 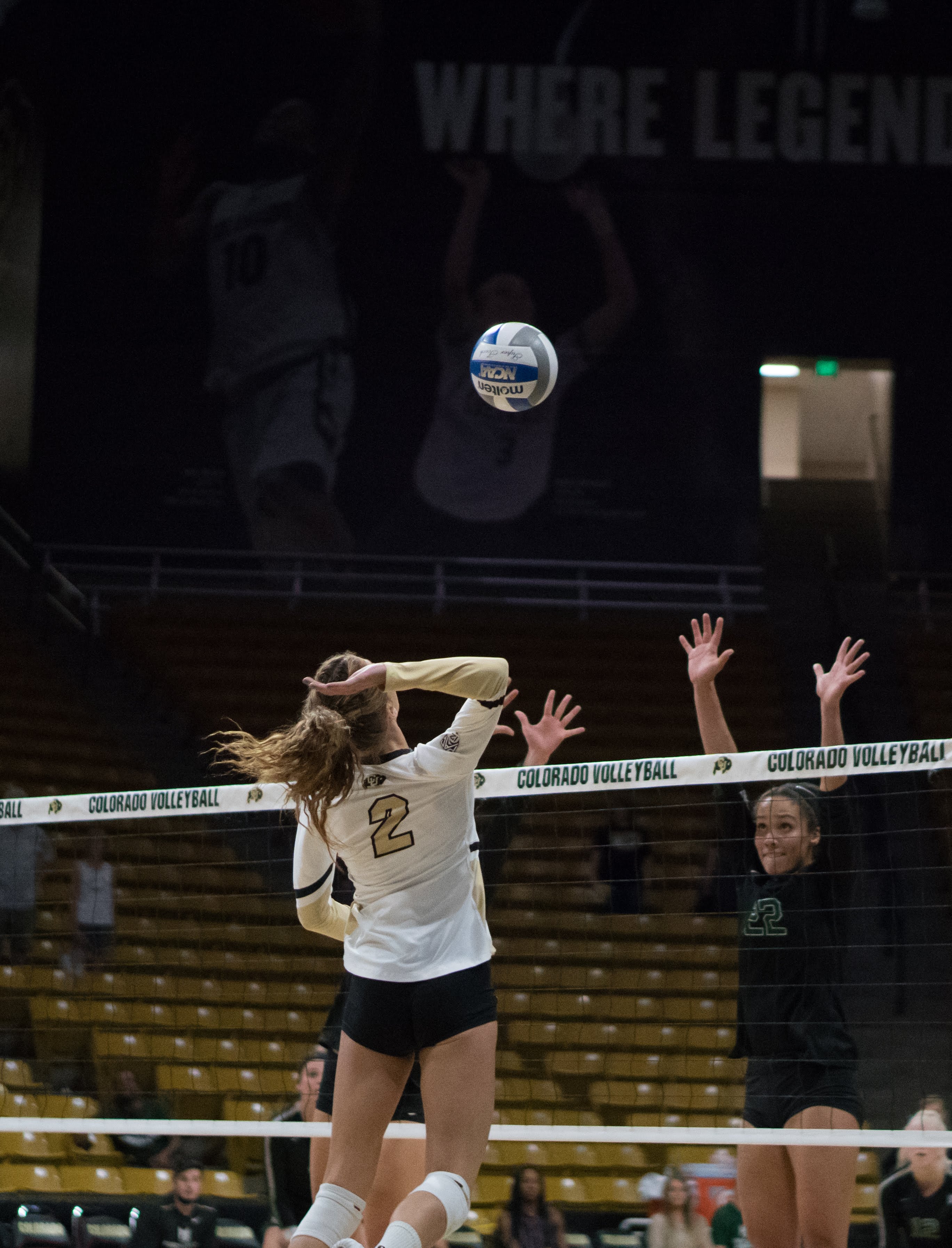 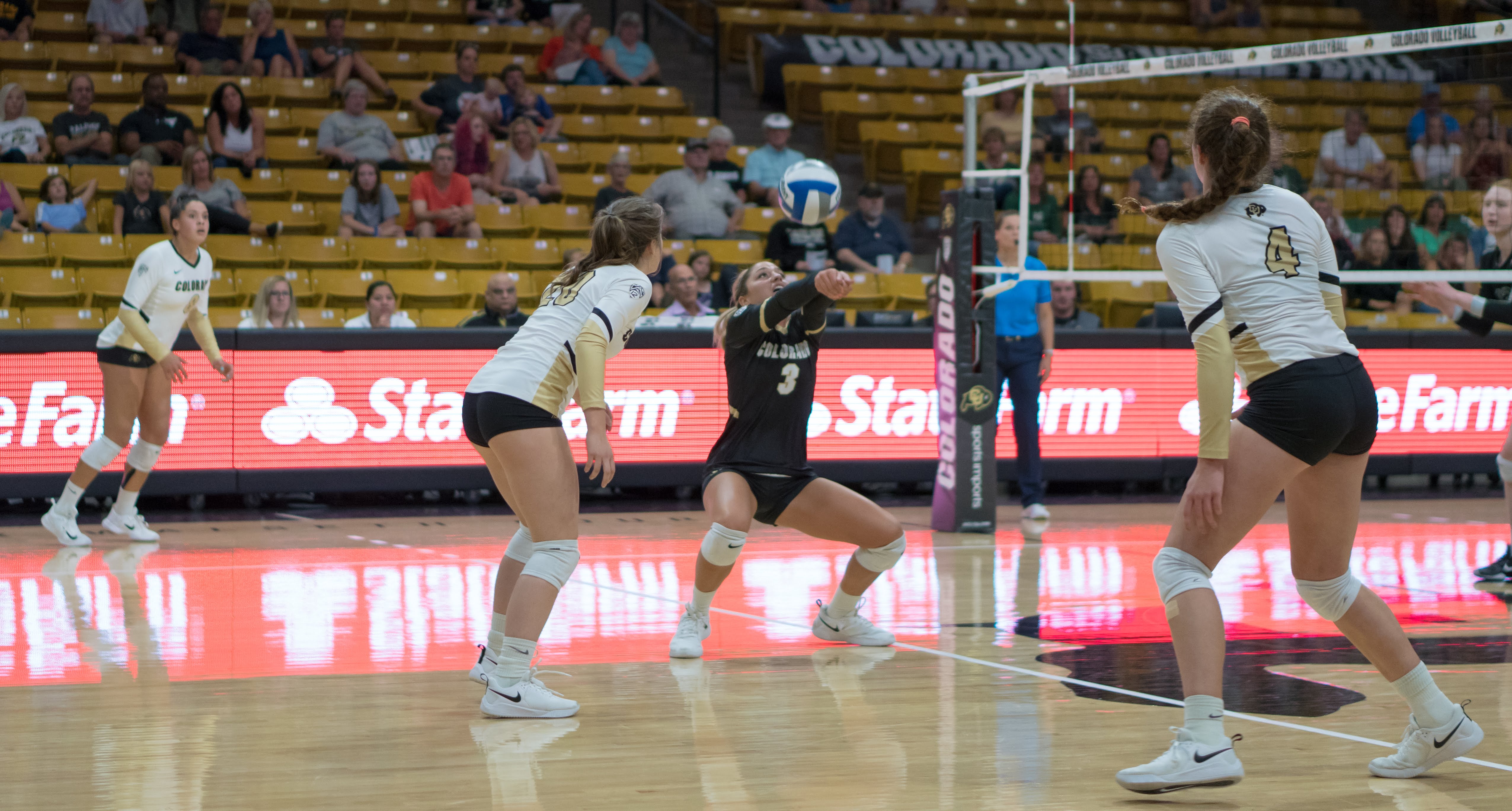 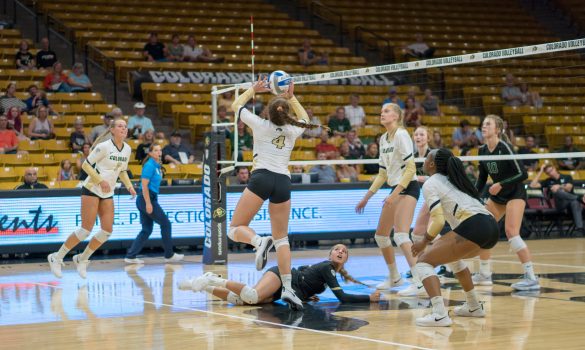 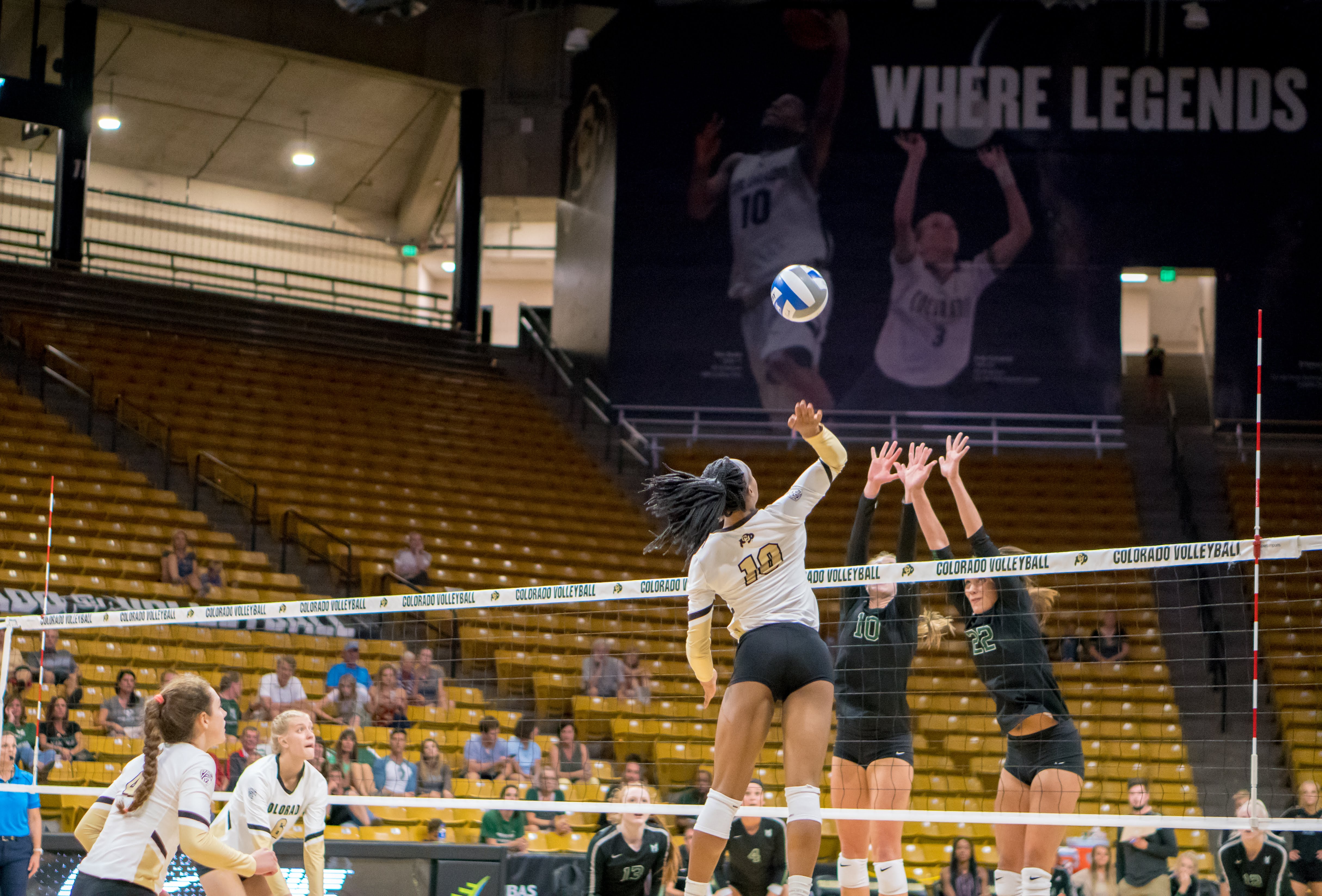 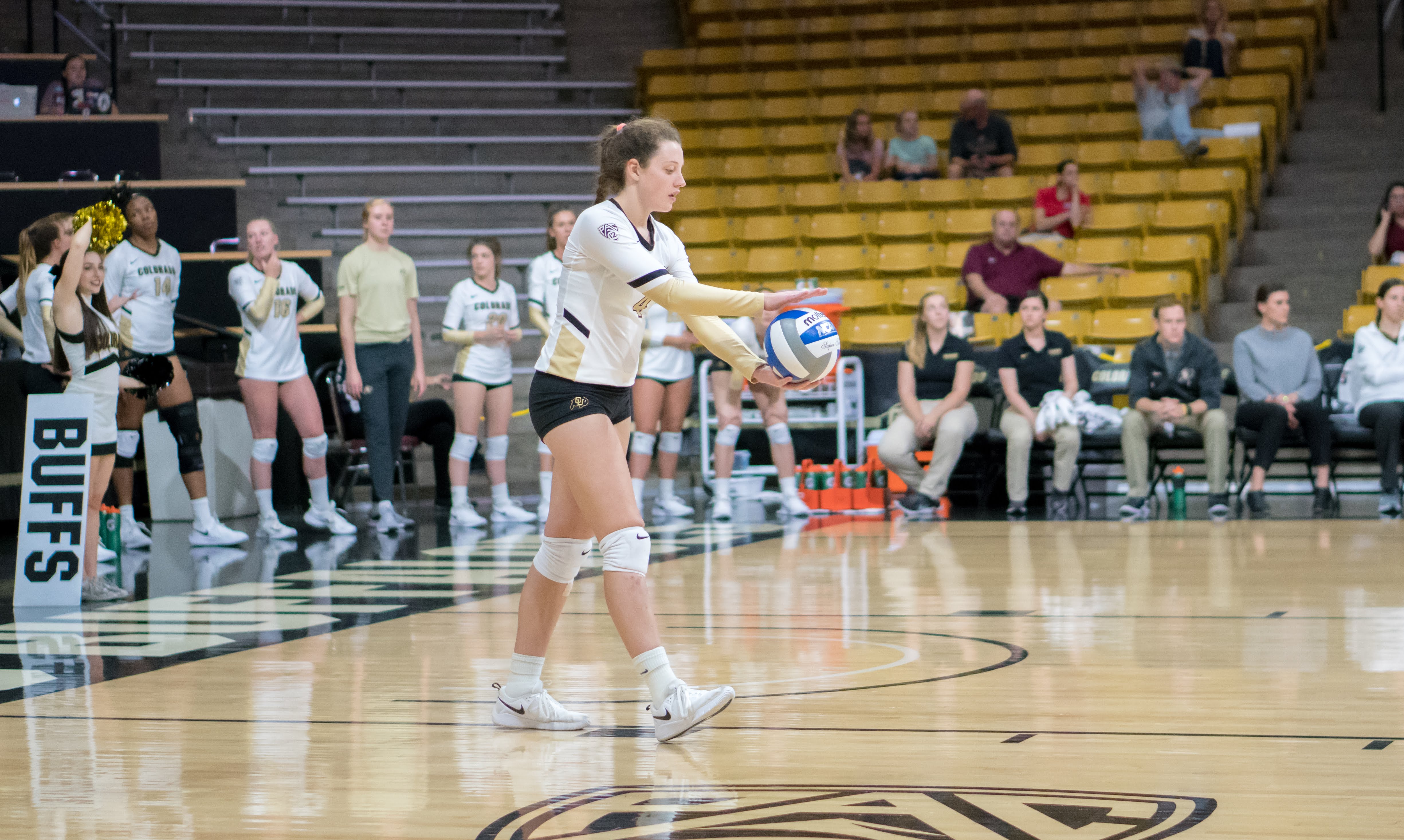 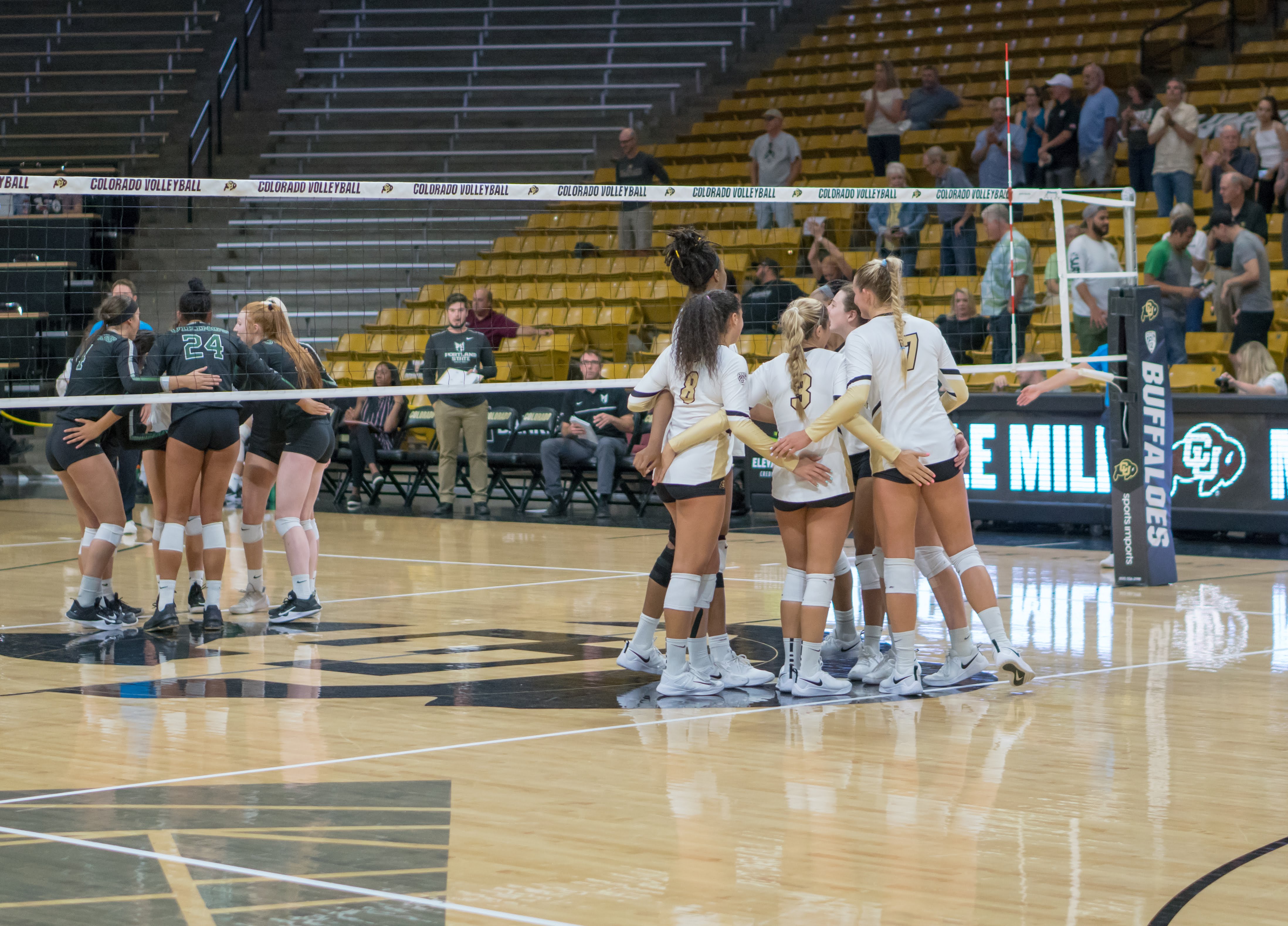