Opinion: Political comedians should take a cue from Michelle Wolf 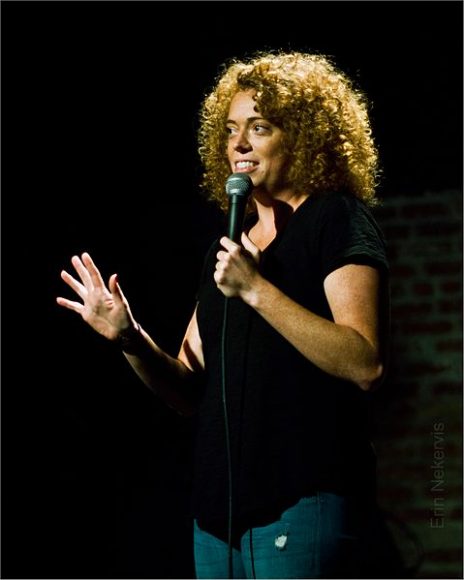 Michelle Wolf performing at Comedians You Should Know in Brooklyn. Sep. 21, 2016. (Erin Nekervis/Flickr)

If a comic doesn’t make you feel uncomfortable, they’re not doing their job.

Michelle Wolf’s speech at the White House Correspondents’ dinner Saturday night did just that, setting a precedent that all political comedians should follow: using satire as a thought provoking platform rather than a coping mechanism.

Wolf publicly roasted the president, the liberal media and the public, creating a lot of laughs and even more discomfort for members of both parties. Instantly, the comedian introduced herself with a joke that targeted the former U.S. Senate nominee Roy Moore, who was accused of sexual harassment and defended by President Trump.

The discomfort Wolf provided Saturday night was just what the doctor ordered.

Many late night television talk show hosts such as Stephen Colbert and Jimmy Fallon, provide timely and politically progressive narratives on the day’s news and popular culture, increasingly reaching larger audiences and becoming more prevalent than traditional news sources. In fact, a 2012 study found that in addition to increasing viewership of late night talk shows, people who watch shows like The Daily Show are more informed than people who watch, for example, Fox News.

Political satire is increasingly important in today’s political climate. However, the inclination to use comedy as a less painful delivery of news has, to some extent, allowed comedians to become complacent.  For example, Stephen Colbert, a comedian who has the potential to create a space for real controversial discourse with his 3.83 million viewers compared to CNN’s prime time 985,000 viewers, typically resorts to light-hearted comedy.

A sketch that comes to mind is Colbert’s “Brain Fight with Tuck Buckford,”  a parody of infamous conspiracy theorist Alex Jones. The various sketches are based on segments of Jones’ radio show and feature the comedian mocking and overemphasizing the conspiracy theorist’s  reporting style and theories.

While this sketch, along with a variety of other political comedians’ sketches, hilariously twists pop culture phenomena and news stories to relieve so many of the politically afflicted, it pretty much stops there.

Another sketch that comes to mind, and has since become a satirical television series, is Colbert’s popular “Cartoon Donald Trump” sketch. The comedian interviews a literal cartoon version of the president, running with an already popular narrative of publicly mocking Trump for his quite frequent animated behavior.

But with a viewership in the millions, should political comedians stick to light-hearted comedy, existing primarily as a source of comfort rather than a platform for real change?

Michelle Wolf also adopted the popular trend of mocking Trump as she fired off joke after joke. Yet, she intentionally, and even explicitly, framed her jokes toward the president as a comment on the unoriginality and ineffectiveness of current mainstream and comedic criticisms.

“People call Trump names all the time. And look, I could call Trump a racist, or a misogynist, or xenophobic, or unstable, or incompetent, or impotent. But he’s heard all of those, and he doesn’t care. So tonight, I’m going to try to make fun of the president in a new way — in a way that I think will really get him. Mr. President: I don’t think you’re very rich. Like, I think you might be rich in Idaho, but in New York you’re doing fine.”

Over the years, researchers have found that certain types of comedy, such as the satire most commonly adopted by late night political talk shows, perform a crucial social function — if used correctly. As seen in Wolf’s speech, her use of sophisticated satire has the ability to break taboos and hold not only those in power accountable but also those who already control the ongoing narratives.

She also remains relatively non-partisan, which ultimately gets her points across even more effectively. From criticizing the current administration to the liberal media, the comedian left no stone unturned.

“[…] I’m sure you all want me to talk about Russia and Putin and collusion, but I’m not going to do that because there’s a lot of liberal media here, and I’ve never wanted to know what you guys look like when you orgasm.”

Wolf may be criticized for her harshness, but the harshness was, in reality, the cushion. Had the comedian stood up on stage and listed off her grievances in the same manner as every other discontented American citizen, who would have listened and who would have really heard her?

For example, her insults toward White House Press Secretary Sarah Sanders, who was in attendance Saturday night, took a personal tone. However, the jokes were not really personal attacks as much as they were harsh comments on her character as a politician and her career history of public deception.

“I actually really like Sarah. I think she’s very resourceful. She burns facts and then she uses that ash to create a perfect smoky eye. Like maybe she’s born with it, maybe it’s lies. It’s probably lies.”

This isn’t by any means to say that political comedians who are starring as the primary news sources are failing by creating an atmosphere of easy laughter and comfort in a time of high political polarization and tension, but that may be what all late night talk shows are — easy laughs.

Many of those representing the White House at the dinner have since commented on Wolf’s performance. Mercedes Schlapp, a White House senior communications advisor commented on “Fox & Friends” that the comedian’s jokes were “so incredibly disrespectful.” But Wolf’s jokes were not meant to comfort the comfortable. They were meant to be an unapologetic delivery system for the truth — something that most comedians would argue is the heart of comedy.

While masses will criticize her for the controversial wake she left Saturday night, Wolf pushed every social boundary. And considering the increasing popularity of comedy as an avenue to relay news, it is important for other comedians to take a cue from Wolf and also deliver an uncomfortable and unapologetic truth in one of the few languages everyone understands, rather than telling the audience what they already know.