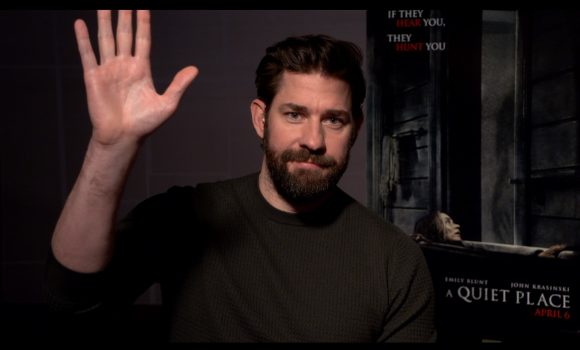 John Krasinski during a promo for A Quiet Place (Image courtesy of TBD MARKETING GROUP, LLC)

John Krasinski was once known primarily for his role on the Emmy award-winning smash hit comedy The Office. Since then he has expanded his career from TV to film, taking on a diverse set of projects. In 2016, he starred in 13 Hours and was an executive producer for the award-winning film Manchester By The Sea.

His most recent project is the ambitious psychological horror film, A Quiet Place. John Krasinski is deeply invested in the project as he is not only starring in the film but serves as the director, executive producer and co-writer of the film. Krasinski and his wife Emily Blunt play the parents of a family struggling to survive in silence after the arrival of terrifying super-natural creatures that hunt by sound. The hushed and haunting tone of the film amplifies the tension, creating a nerve-shredding thriller.

The sound adverse premise of the movie already sets A Quiet Place significantly apart from the visceral screaming and terror that the horror genre has relied on for so long.

John Krasinski recently sat down with the CUI and other college newspapers to talk about his motivation to make a horror film that explores the importance of family, and his challenges throughout the production of A Quiet Place.

The idea of keeping one’s children safe from harm is what initially drew Krasinski to the project. “We just had our second daughter about three weeks before I read the script. So I was already in the state of terror of keeping this girl safe […] and in comes this script about a family that relies on each other, about parents that would do absolutely anything for their kids. So it doesn’t take a lot for me to cry, but I was wide open for this one and it connected to me in a big way,” Krasinski said. “I really wanted to drill down on all that family stuff and make every single part of the movie come back to being a family.”

Krasinski wanted to focus on the family deliberately to create an emotional attachment between the audience and the family in the film.

“It’s funny, on The Office I remember Greg Daniels, the creator of the show, telling me, ‘Your job is not to deliver these lines funny. Your job is to deliver these lines, and if people think they’re funny that’s up to them. And if people think that what you say to Pam is emotional that’s up to them too.’ And I’ve got to be really honest with you, I would never have done this movie if it wasn’t for that advice.”

He continued, “I looked at this, not as a horror movie, but I looked at it just like Greg said. I said, ‘If I can make you fall in love with this family then you’ll be scared because you don’t want anything to happen to them.’ So I owe him a lot for that.”

Krasinski’s multiple roles on the set were challenging, but it afforded him a major amount of creative direction that enabled him to truly see his vision come to life on screen.

“I’ve never gone so all-in before if I’m really honest. This is the most I’ve ever put into a project not only as an actor, producer and writer and all those things but also as a person — as a dad. I think this is a love letter to my kids […] I was able to use every single aspect of each job to craft [A Quiet Place] exactly as I wanted it. If anybody was going to let me down, it was just me.”

Krasinski has said that he is typically too scared to watch horror movies so he used his fear to inform his decisions writing and directing in a genre that scares him.

“I remember a friend of mine at South by Southwest came up to me and said, ‘I never thought you’d direct a horror movie.’ And I said, ‘Yeah I can’t even watch scary movies.’ And he said ‘Oh that’s why you directed such a good one.’ I asked, ‘What do you mean by that?’ He said, ‘Well if you were trying to scare people that’s not a genuine intention you’re just sort of manipulating people, but if you actually try to tell a story where scares are an added bonus that’s the key to it.’ And I really loved that.”

The family in the film has been able to survive so long largely due to their competency with sign language before the creatures arrived. The daughter (Millicent Simmonds) is deaf. Since the characters are unable to speak out loud throughout the film, it was critical that the cast was proficient with ASL. Krasinski and the cast learned sign language through Millicent Simmonds, a deaf actress.

“It was non-negotiable for me to cast a deaf actress for this role, which is a deaf character. But I didn’t know I would get so lucky and having such an incredible guide in Millie. So learning ASL was just one of the things that she made so much easier because I know it sounds poetic, romantic and corny but it’s true,” Krasinski said. “I’ve never had someone take in all of me when we were communicating, so to watch someone actually watch every little gesture that I made watch my eyebrows […] there’s no better teacher for ASL than Millie because she was so kind, so gentle and when we were doing a horrible job she was like that’s OK. It’s actually more like this.”

The use of ASL in the film does not limit the expressions of the characters as Simmonds told Krasinski. “One of the other things I loved about what Millie she said was that each character has their own version of sign language and she said I think it’s really interesting that each of the characters is coming out in your sign. I said ‘What do you mean?’ She said, ‘Well the father is a guy who doesn’t care about anything in the world but keeping people safe. So all of his signs are very curt and short and Emily is trying to give these kids a much bigger life. So hers are much more poetic and gesture-y’ and it was actually a really amazing experience.”

A Quiet Place debuted at SXSW earlier this year to rave critical reviews and opens in theaters on April 6.