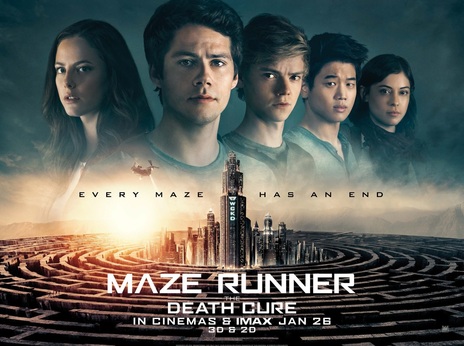 “Maze Runner: The Death Cure,” the latest in the series hit theaters on Jan. 26, 2018. As an avid “Maze Runner” fan, I was eagerly anticipating the arrival of this movie, and am happy to say that I was not disappointed. Though the plots of the films differ in some ways from those of the novels, I still thoroughly enjoyed the movie adaption of “The Death Cure.” Taking on a darker tone than the first two films, it was an action-packed, entertaining and tear-jerking movie.

This movie continues telling the story of Thomas and his friends as they face the pandemic virus called the Flare. Their world has been scorched by the solar flares, and the organization WICKED has been trying to find a cure for the Flare through human experimentation.

Initially, the film was set to be released towards the beginning of 2017 but had to be postponed when Dylan O’Brien, who plays Thomas, the protagonist, was injured on set during filming.

The soundtrack and cinematography of “The Death Cure” converged to hold my attention and keep me emotionally involved with the story. The soundtrack noticeably varies from eerie and tension building to dramatic and intense, adding to the anticipation and impact of the score. I found myself on the edge of my seat, awaiting what would come next. Accompanying the music, the color palette of the film was a composition of muted blues and grays, conveying its serious tone.

Even after reading the books several times, the movie held surprises, putting drama alongside action, which made it that much more fun to watch. Despite the fact that the movie did not follow the plot of the book as much as I would have liked, the casted actors portrayed the characters much like I imagined them in my head.

Thomas (Dylan O’Brien) showed determination and courage as he stepped into the shoes of the leader. However, some of the background information about how he becomes a strong leader is missing from the film. O’Brien did a great job bringing out Thomas’s strong will and desire for a better world. Newt (Thomas Brodie-Sangster) displayed the internal conflicts of his character so well that it pulled at my heartstrings. Kaya Scodelario portrayed Teresa in such a way that she elicits very strong emotions toward her character and the decisions she made. While there were a few things I would have changed, I was personally very happy with the cast and the way they brought the characters to life.

Overall, I really enjoyed this movie. From the developments to the plot and the characters and the action-packed adventure, I didn’t want to miss a second. When I stepped out of the theater, all I could think was, “whoa.” For all the “Maze Runner” fans out there, I highly recommend this movie.