Buffs unable to stop ASU in second half, fall on the road 80-66 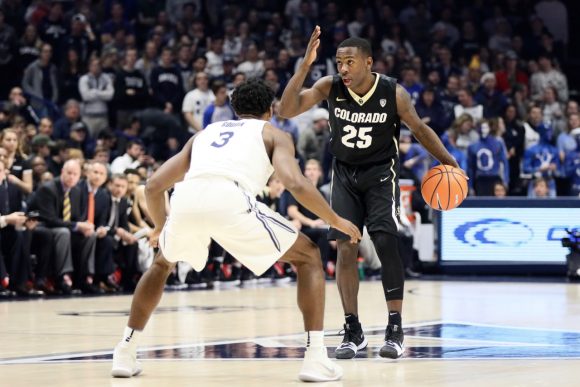 The Colorado Buffaloes traveled to Tempe, Ariz. to take on the No. 21 Arizona State Sun Devils at the Wells Fargo Arena on Saturday night. An explosive second half by ASU boosted the Sun Devils to a 80-66 victory.

The last time the two teams met, the Buffs were able to get the best of the Sun Devils, winning 90-81 in overtime at the Coors Events Center.

The Buffs (12-10, 4-6 Pac-12) have struggled on the road this year, as they are now 1-7 away from Boulder. Their only road win came at Pauley Pavilion against UCLA earlier in the month.

The first half was perhaps closer than it should’ve been. A couple turnovers and some bad shots late in the shot clock had the Buffs trailing early, with Arizona State guards Tra Holder and Shannon Evans II getting out in transition and getting good looks near the rim.

It was mostly the Sun Devil’s success near the rim that kept them in the lead throughout much of the first half, as they were cold from beyond the arc, shooting 0-for-10 in the first half from behind the three-point line.

It was the first half of the season for the Sun Devils in which they didn’t make a 3-pointer.

The Buffaloes slowly started to climb back, hitting a couple timely buckets and besting the Devils in fast-break points as the half came to a close.

Freshman guard Mckinley Wright IV had a chance to give the Buffs their first lead of the game in the closing seconds of the half, but an offensive foul led both teams into the break tied at 32-32.

The Buffaloes didn’t take long to get a lead in the second half, as a baseline jumper from senior guard George King gave him his first points of the game and at the same time gave the Buffs their first lead of the game, 36-35, at the 18:16 mark.

Even though ASU missed all 10 threes they attempted in the first half, the Sun Devils came out in the second half launching from beyond the 3-point line like they had made all 10.

The Sun Devils made 10 threes in the second half, with Holder and Evans II both draining four long bombs.

A couple deep contested threes from the guard duo began to build a lead for ASU and got the crowd at the Wells Fargo Center back into it.

Overall, the Sun Devils shot an astonishing 50 percent from the floor in the final half, as about halfway through the final half, ASU started to build a lead that the Buffaloes just couldn’t slow down.

The result was an 18-4 run over four minutes in the second half, and even though the game was close most of the way, a win began to look increasingly out of reach for the Buffaloes.

Holder, the team’s leading scorer, finished with 22, while Evans had 19. Big men De’Quon Lake and Romello White both added 10 points.

CU nearly finished the game without a scorer in double digits. Sophomore forward Lucas Siewert and Wright both were able to finish the game with 10 points, while Collier added 11 off the bench.

The Buffs’ leading scorers, Wright IV and King, were held in check. Wright IV, despite finishing with a team-high of seven assists, shot just 1-for-10 from the field and finished with just two points.

King, who snagged 10 rebounds on the night, couldn’t secure his sixth double-double of the season as he finished with just eight points.

Despite the loss, there were some encouraging signs for the Buffs. The balanced scoring and bench performance was spoiled by a near unstoppable offensive performance from Arizona State in the second half.

Sophomore guard Deleon Brown was the only Buffalo who saw the floor and didn’t score.

And after being outrebounded by 16 at the Coors Events Center by Washington in their last home game, the Buffs showed much more effort on the glass in Tempe. They outrebounded ASU 44-34, a significant improvement considering they allowed 50 rebounds to the Huskies just a week ago.

However, the same problems persist for the Buffs. All season long, head coach Tad Boyle has stressed how important taking care of the basketball is for the Buffs. The amount of turnovers is often the most telling figure of any game for the Buffs, and this game was no different.

The Buffs turned it over 17 times and allowed ASU to get out in transition and score 19 points off those turnovers.

Colorado has dropped its last three games and now comes back to Boulder to take on Utah on Feb. 2nd at the Coors Events Center.