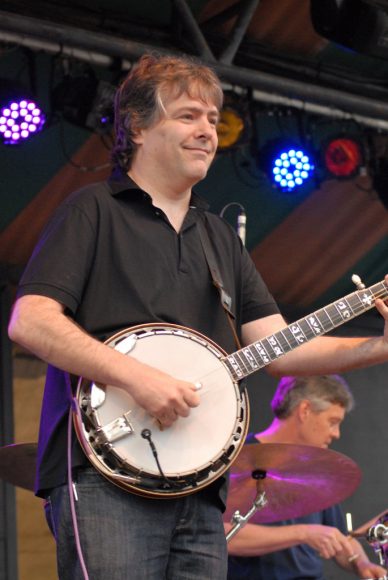 The concert took place at Macky Auditorium on the University of Colorado’s campus. The auditorium was packed to the brim, despite the forecast predicting heavy snowfall that evening. The beautiful auditorium afforded a spacious, yet intimate atmosphere through which the musicians performed their music.

The concert began with the dimming of white, elegant, floral light fixtures that lined the auditorium balconies and walls. Béla Fleck was center stage as the string quartet stood upon a raised surface. His banjo gleamed white, in stark contrast to the glossed, wooden string-instruments supporting him.

They opened with a song composed by Fleck in 2012 titled “Night Flight Over Water.”  This is a composition of three distinct sections: “Tumbledown Creek,” “Hunter’s Moon” and “The Escape,” which spoke volumes to the skill of the whole group. Their concentration was reflected by their stoic demeanor as they created a perfect cadence of plucks, strums and gentle twangy riffs. “Tumbledown Creek” introduced the audience to Fleck’s integrative style, which seamlessly combined elements of bluegrass, folk and  jazz.

The program noted that Fleck had written these compositions tailored precisely for playing along with Brooklyn Rider, and that was evident throughout the performance. The layering of the music was seamless as it sounded like a conversation being held between the instruments. The sharp punctuation of the staccato notes — when the musicians used their fingers instead of their bows — added a personality to the sound. Short pauses served to precisely emphasize each instrument’s powerful solo moments.

Fleck, a genius within his unique musical career, has 30 Grammy Nominations serving as a testament to his skill. He has the largest number of nominations of any instrumentalists in history according to his website. His banjo career was ignited when his grandfather bought him his first banjo in 1973. Since then Fleck’s talents have taken him around the United States and the world. Along his journey, Fleck was able to work with renowned artists such as Garth Brooks and Dolly Parton. His wide range of exposure to different styles of music allowed Fleck to develop his remarkable and unique flavor infused in all his compositions and performances.

Fleck paused before continuing his set to briefly introduce all the musicians on stage, describing the next song called “ The Landing.” He co-wrote the song with composer and bassist Edgar Meyer in the eighties. Fleck spoke with a humor that elicited tremendous roar of laughter from the audience.

“The voice of doom leading towards the most terrible thing of all, the banjo solo,” Fleck said as he described the riveting and complex solo he would perform during “The Landing.”

The solo was a testament to his tremendous mastery of the instrument. Fleck expertly shifted from string to string, producing a striking and twangy ring that cut through the silky smooth strums and reverberations of the other, more traditional string instruments. The song was upbeat and exciting, lifting the whole mood of the room.

Fleck and Brooklyn Rider effortlessly captured the attention of the audience as they played. The crowd bobbed their heads and swayed to the flowing melodies throughout the night. In more intense portions of the songs, the musicians would close their eyes, absorbed with their own melody. Small details like this added to the intimate beauty of sound they were producing, even as some of their songs, like “The Landing,” lasted for around 20 minutes.

The musician’s ability to stay so connected allowed their sound to emanate through the auditorium like a feathery fog, consuming, yet clear and delicate to the ear. The overall mastery presented to the Boulder community by Fleck and Brooklyn Rider, performing as a team, was crystal clear.