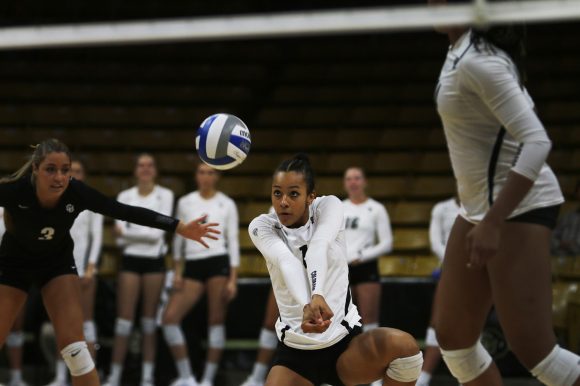 Junior outside hitter Frankie Shebby lunges for the ball during the CU versus Washington game. Nov. 3, 2017. (Bri Barnum/CU Independent)

The Colorado Buffaloes women’s volleyball team finished 22-9 at the end of the regular season, good for fifth in the Pac-12 Conference.

The Buffs qualified for the NCAA Tournament and are one of nine Pac-12 squads that will take part in the tourney in Waco, Texas. For their first game of the tournament, they will be playing the 23-5 James Madison Dukes on Friday.

JMU is a member of the Colonial Athletic Association, which has a lot of schools on the East Coast with programs that are not as represented in the tourney as the Pac-12 is.

Don’t consider that a jab at the Dukes, though. They have dominated a lot of schools this season. Their only five losses came from games that went to either four or five sets.

For the Buffs on the attack, junior outside hitters Alexa Smith and Frankie Shebby do a good job of getting most of the team’s kills. Colorado has also been solid at passing the ball. The Buffs boast five players recording at least one kill per set.

JMU relies on the power of junior outside hitter Bryn Recker as she leads the Dukes with 362 kills. Recker is the Smith or Shebby of JMU and will be the hardest person to block. However, James Madison also seems to be adept at producing a spread out offensive attack. Nine Dukes are averaging more than a kill per set.

Whereas Colorado turns often to freshman setter/libero Brynna Deluzio for setups — she leads CU with 1,317 assists this year — JMU’s offense usually stems from two sources: Sarah Martin, the team leader in assists with 559, and Tilbe Yaglioglu, who has 511.

The Buffaloes’ defense will need to be strong. The presence of junior middle blocker Naghede Abu and senior opposite Joslyn Hayes will hopefully cover up any kill coming across the net.

The Buffs could have an easy game if they don’t let the prospect of an easy opponent get to them. They have faced tougher opponents than JMU, namely the multiple top 25 teams that reside in the Pac-12. The Dukes have not faced a ranked opponent this season but are riding a five-game win streak heading into the contest on Friday.