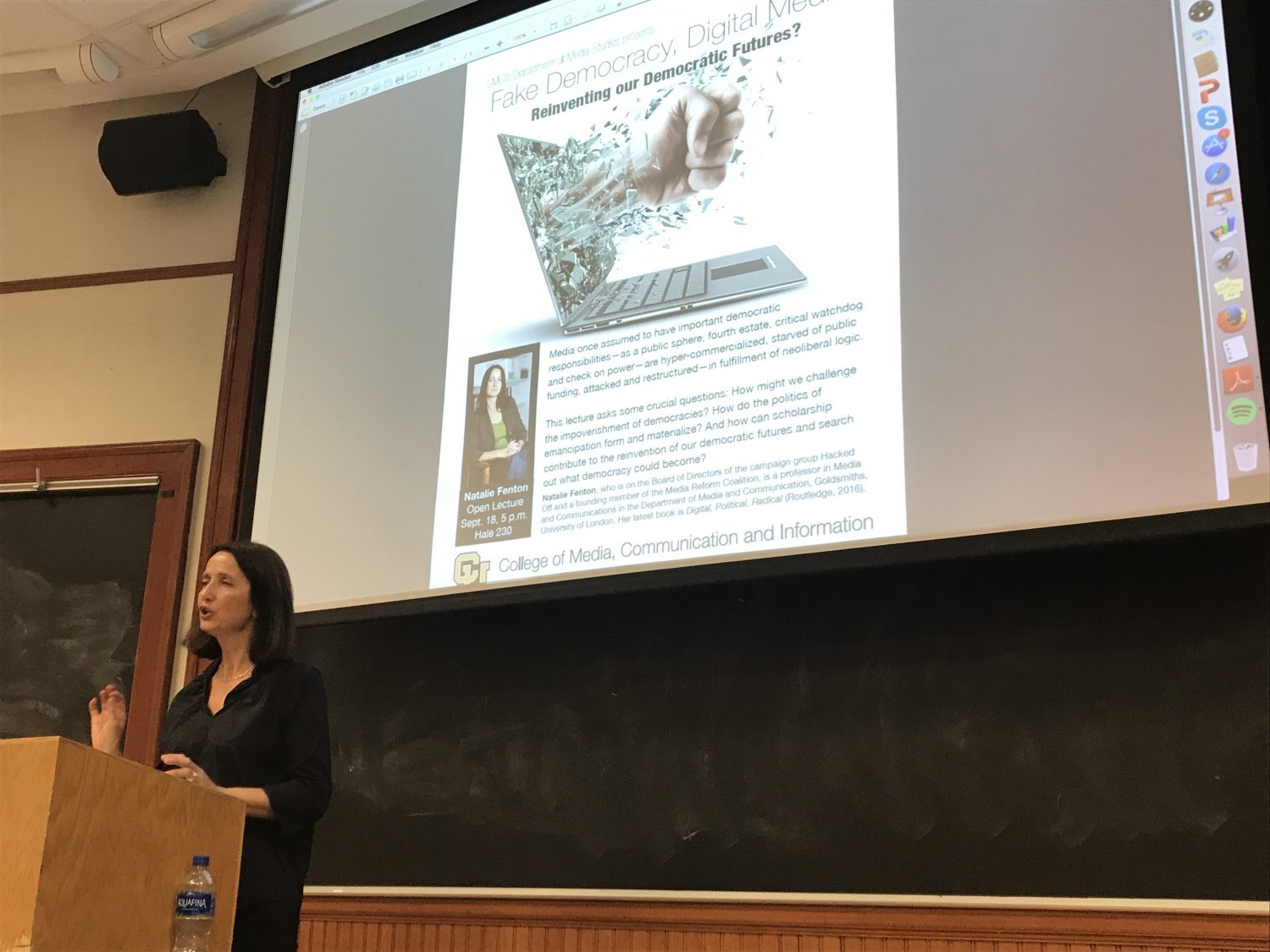 Held in Hale Science, the lecture was filled with students, faculty and members of the public, many of whom had to sit on the floor or against the classroom walls due to the overwhelming popularity of the session.

Fenton, a Professor of Media and Communications at Goldsmith University of London, began the by explaining the deeply-rooted relationship between American democracy and the media. Since the country’s early days, the media has acted as an “independent watchdog” or “monitor of unchecked power,” keeping government officials accountable.

“I found it really interesting how [Fenton] talked about how intertwined democracy and the media are,” said Nina Ryan, a freshman and journalism major at CU. “I’m definitely more aware of that relationship now.”

Fenton went on to explain how this relationship has shifted over the course of the past two centuries. Journalism’s role in the U.S. has been greatly influenced by the country’s capitalist system. The profession has become more of a business than the unofficial branch of the government it was intended to be. The goal of journalism is no longer to keep the government accountable for the interest of the citizens, Fenton explained. It is but rather to profit off of citizens.

“The media has adopted the mantras of the free market, rather than very difficult practices involved in ensuring free expression and political participation,” said Fenton.

This trend, she explained, has resulted in a loss of authority and legitimacy in the media. American trust towards the media has fallen from 53 percent of citizens in 1997, to 32 percent in 2016.

Fenton claimed that the influence of the media contributed to recent radical political decisions, such as the Brexit vote in the U.K. and the election of Donald Trump as president of the U.S.

“It wasn’t so much his provocative and offensive tweets that enabled him to capture the headlines that helped him ascend to the presidency but the way in which mainstream news networks were from the outset fascinated by his personality and commercial potential,” she said.

The media professor argued that the only groups of people who actually benefit from Trump’s America are upper-class citizens and the media. Though President Trump constantly criticizes the media for being “fake news,” contributing to the public’s distrust of it, she believes there is no denying that viewership has risen since Trump began regularly making headlines.

Fenton attributed increases in media attention in the past year to the outrageous political atmosphere of the country and the constant string of scandals pulling in a new, younger audience to traditional news sources.

“I thought it was interesting that she said that radio is now the most trusted form of media. I never really thought about how there’s no links for you to be distracted by, you’re just listening and that’s how you get your news,” said Ian Lee, a freshman and strategic communications major.

Fenton ended the lecture on a positive note, assuring the audience that journalism hasn’t actually descended into a corrupt practice. She emphasized that there always have been, and always will be, fundamental flaws in journalism, and in democracy. The public is only paying special attention to those flaws now.

Fenton affirmed that this is for the best, because it gives the citizen a more important role in their own democracy: to keep the media accountable.