Students and staff of the University of Colorado Boulder protested outside the University Memorial Center around noon last Thursday for an event titled “CU United: No to Visa and Immigration Ban.”

“We think this is a standard set by high quality universities and we need to meet it,” said Michael Skirpin, a Ph.D. student in engineering and one of the leaders of Who Runs CU. “When there’s obvious examples out there of real actions that could be taken, we do appreciate [the chancellor] signing a petition, but we would like to see actionable commitments and more than just talk, because talk has been happening on this campus for a very long time.”

Students shared their personal experience as international students. Others read aloud the experiences of students who wished to stay anonymous for their own safety. Samantha Molnar, a graduate student in computer science and one of the protest organizers, read aloud from an Iranian Ph.D. student’s prepared statement. The student wrote that they “can never forget the picture of the handcuffed 5-year-old boy in the airport” whom they saw while traveling recently.

“Our idea behind this is not only to show support and solidarity for these international students, but on a CU level, holding the administration accountable for the things we’re asking them to do,” Molnar said. “We’re going to keep demanding things until we see some action from them.”

Faculty members also spoke and shared their experiences within the university. Shideh Dashti, assistant professor in geotechnical engineering and geomechanics, talked about her history as a person of international origin and her academic work to increase the resilience of cities to natural disasters.

“I work every day to give back to my community,” Dashti said. “The U.S. is my country and I feel loyalty like I’ve never felt at any other place.”

Toluwanimi Obiwole, the 2015 Denver Youth Poet Laureate, made an appearance near the end of the event to share one of her poems about her Nigerian background. “Where I am from, we do not run. We root ourselves in whatever piece of soil we have found,” the poem read.

The majority of the protesters were undergraduate or graduate students or faculty at CU. People joined and left, so the group was in constant flux. Between the sharing of stories and statements, Skirpin led the group in chants such as “no ban, no wall, CU is a place for all” and “people, united, will never be divided.”

The event ended with the protesters marching towards the Norlin Quad to spread their message. They plan on presenting their demands, as well as a petition to make CU Boulder a sanctuary campus, at the Regents Board meeting this week. 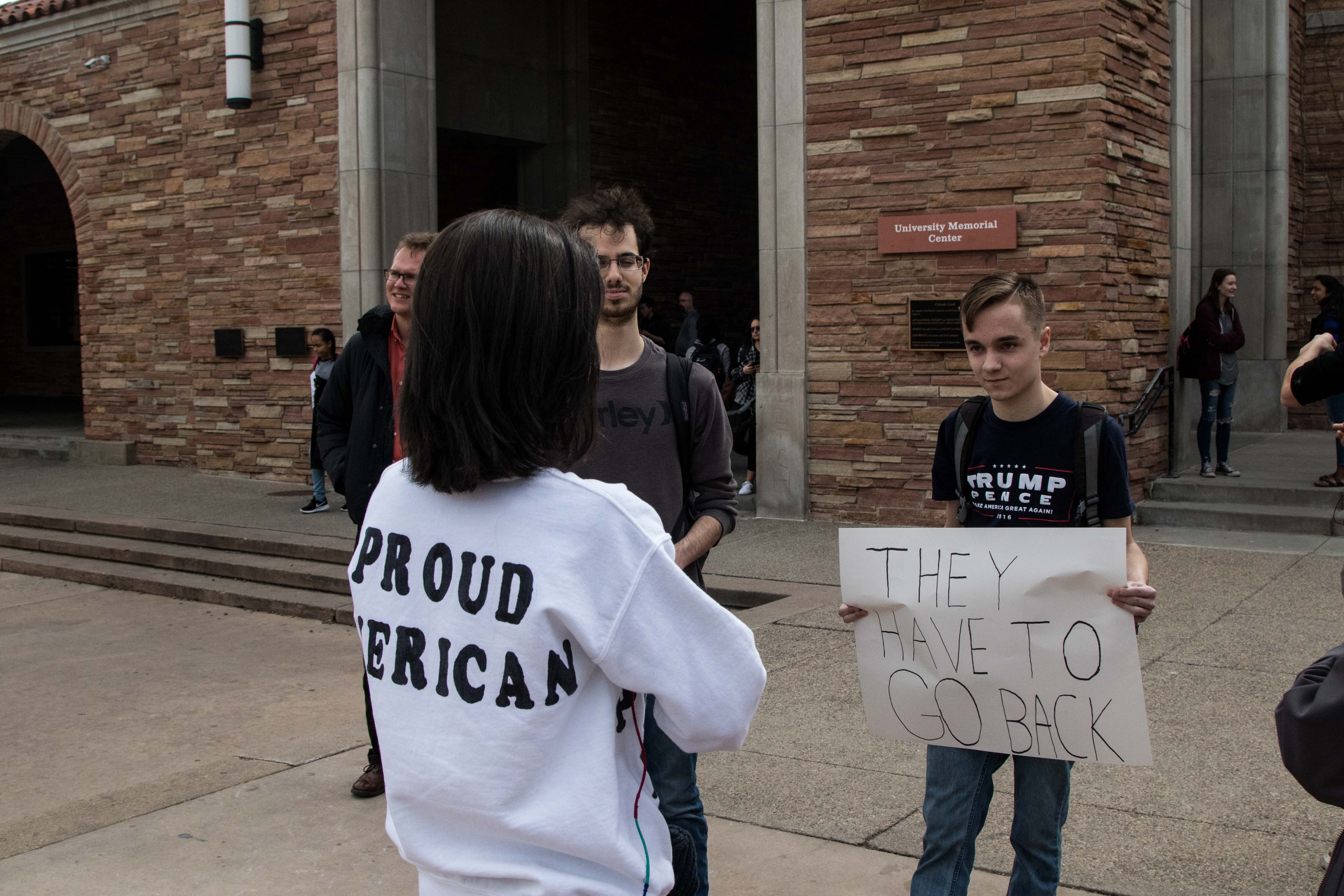 A student opposed to Trump’s immigration ban debates a Trump supporter during the protests against the travel ban on Feb. 9, 2017. (Jackson Barnett/CU Independent)