Trump pushes for DAPL, but protestors, law stand in his way

From her home in Fort Yates, Standing Rock, Willma Teton Kidder was awoken with the news that President Donald Trump passed actions advancing the permits for the pipeline she had been fighting for months to halt.

The Dakota Access Pipeline is a 30-inch diameter oil pipeline slated to traverse 1,172 miles of the American plains, carrying crude oil from the Bakken Oil fields of North Dakota to southern Illinois. Almost 90 percent complete, one of the final hurdles in its construction are the thousands of protesters united to stop the pipeline from crossing under the Missouri River, half a mile north of the Standing Rock reservation. Completion of construction, the Standing Rock’s legal defense claims, will pose an existential threat to the Lakota Sioux living on Standing Rock and all those downstream of a potential pipeline leak. 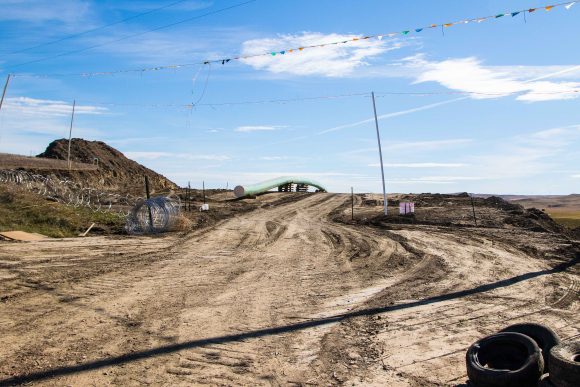 On Dec. 4, Kidder and the self-proclaimed “water protectors” won a major victory when the Army Corps of Engineers, the federal agency in charge of evaluating and approving the permits for the pipeline’s certain water crossings, denied the easement that would allow for the pipeline to cross the river.

In a statement, Jo-Ellen Darcy, Assistance Secretary to the Army Civil Works, cited a need for an Environmental Impact Statement (the most scrupulous level of environmental assessments) based on “exchanges of new information with the Standing Rock Sioux and Dakota Access.”

On Tuesday, Trump asked for this statement and the denied easement to be “rescinded or modified,” and for the Army not to complete the Environmental Impact Statement but instead grant the permits based on the Environmental Assessment (a less thorough review) that found no significant impact in July of 2016.

“It was like deja vu,” Kidder said, referencing Trump’s actions and the centuries of broken promises to Native Americans.

“They stole our children, put them in boarding schools, raped our women, did whatever they wanted with our people,” Kidder said over the phone from Standing Rock while attending meetings with members of the U.N. and ACLU, who are investigating human rights abuses by local law enforcement in North Dakota. 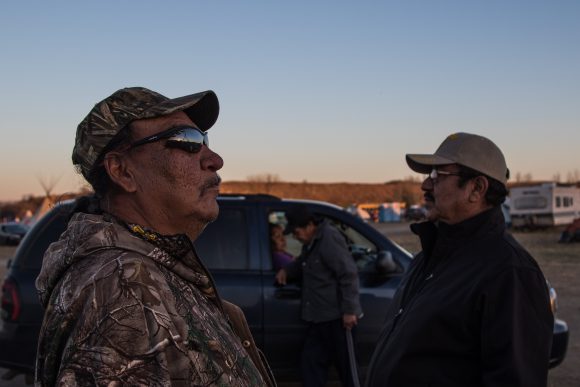 BJ Kidder (left) stands with with the reflection of a teepee he helped build while a friend Manaja Hill (right) stands next to BJ’s wife, Wilma Teton Kidder (center) in October of 2016 in the Dakota Access Pipeline protest camp. (Jackson Barnett/CU Independent)

Sharon Jacobs, an energy and environmental law professor at CU, says that the army is under a “statutory mandate” to complete the EIS, as stipulated under the National Environmental Policy Act of 1969, a process they say they will carry out.

The memorandum signed Tuesday is what is known as a “presidential directive,” says Jacobs — a statement of the president’s policies and requests for how to enact them. In this case, the directive states Trump’s support of the Dakota Access and Keystone XL pipelines’ completion.

Even as the Environmental Impact Statement is expedited, it still might be years before all the data has been collected and analyzed. The Government Accountability Office concluded in a report that an EIS takes an average of 4.6 years to be completed, longer than Trump’s first term.

After the EIS is completed, the battle over the permits for the Missouri River crossing still may not be over. “These are very common to be challenged,” Jacobs said.

Drawn-out litigation often ensues after Environmental Impact Statements are complete due to the scale of the projects they review and litigation is almost certain to engulf any decision that comes from the Army Corp. Yet while the EIS, litigation and protests may tangle the Dakota Access for years, permits may still be granted.

“It is a procedural statute,” Jacobs said. In other words, the Army Corps may check all the boxes on their assessment and find that there is significant impact, yet still allow the crossing to take place.

Beyond the environmental impacts of the pipeline’s completion, the “water protectors” are protesting the history of broken treaties between the U.S. government and Native Americans.

“President Trump is legally required to honor our treaty rights and provide a fair and reasonable pipeline process,” said Standing Rock Sioux Tribe chairman David Archambault II in a statement. He referred to the Fort Laramie Treaty of 1851 (and renegotiated treaty of 1868) which grants a vast swath of the Midwest to the Great Sioux Nation, territory the pipeline would cross.

The Fort Laramie Treaty was first broken with the discovery of gold in the Black Hills, sacred land to the Sioux.

The ensuing Indian-American wars lead to the splintering of the Great Sioux Nation and establishment of the current reservations carved out of land promised to the Sioux confederacy.

“When has the [U.S. government] ever honored our treaties?” BJ Kidder, Wilma’s husband, said in an interview in December after the easement was denied.

Despite Trump’s policies for the pipeline’s completion, Wilma has confidence that it will not be completed.