After winning five straight matchups coming off of an opening game loss to start the season, the University of Colorado men’s basketball team kept the streak alive and easily slid past Fort Lewis College on Wednesday night, 95-71.

Senior forward Josh Scott finished the night with a few more spots in the history books as he passed up Alec Burks in CU career scoring history once he reached 1,293 points in the first half. At the end of the game, he upped that number to 1,311.

For the night, Scott led all scorers with an impressive 24 points and 15 rebounds. By halftime, he had earned his 30th career double-double with 11 points and 10 rebounds.

It’s safe to say Colorado has found an offensive system that works well with them, in contrast to last season.

“I think we’re in a good rhythm [offensively],” Fletcher said. “We’re sharing the ball and we’re making sure we’re playing inside-out, so it’s all good.”

“I think you’re seeing our chemistry,” Scott said. “I think we’re a pretty close group, we want each other to succeed and you’re seeing that in how we’re playing. We’re having fun on offense.”

They also shared the ball well and only committed 11 turnovers for the game, and those are two areas this team has struggled with throughout the season.

“When we have 23 assists and share the ball the way we did tonight, we’re fun to watch and a hard team to prepare for because we have a lot of different weapons,” Head Coach Tad Boyle said of his squad. “We can continue to play that way offensively and find an identity on defense, this team is scary good, but we’re not there yet.”

The game itself saw two distinctly different halves. During the first half, the Skyhawks kept the pace with the Buffaloes as they finished out the first 20 minutes of play only trailing by two, 46-44. But once CU got the ball rolling in the second half, FLC had no glimmer of hope of winning the game.

“It was a tale of two halves, obviously,” Boyle said. “The first half — you’ve got to credit Fort Lewis… you know, this is their Super Bowl. These guys came in loose and free, with nothing to lose, and they played like it. We knew they were capable of making shots, did make shots.”

The Buffs started off the game a little rocky, allowing the Skyhawks to lead off the scoring with five straight points before they were able to get on the board. But when Colorado responded, it responded big. After a 17-0 run put the Buffs up 17-5, the Skyhawks showed they wouldn’t quit the game yet.

Fort Lewis managed to fight back and tie up the score at 21 with eight and half minutes left in the first half, and they would not let the home team run away with a significant lead again before the break.

By halftime, the score read 46-44 with the Buffaloes barely on top.

Colorado shot fairly well throughout the first 20 minutes of play, going 17-35 from the field (48.6 percent) and 4-9 from the three-point range (44.4 percent). Scott led all Buffalo scorers with 11 points and 10 rebounds.

But the Skyhawks shot better and took smarter shots. They shot 17-31 from the field (54.8 percent) and 7-13 from the three (53.8 percent), and their downtown shots ultimately were what kept the game close early on. Senior guard Kofi Josephs matched Scott’s scoring with 11 points of his own.

“We knew this team could shoot coming in,” Scott said. “There was no adjustments being made [during halftime] — we knew they could shoot. I think the only adjustment really being made was I think people kind of took it upon themselves to, you know, we’re going to get out there and guard them.”

At the start of the second half, the Skyhawks stayed close, but only for a little while. With about 11 minutes left in the game, the Buffs gained a 13-point lead, 66-53, after two consecutive three-point shots that complemented an 11-point run for CU, forcing Skyhawks Coach Bob Pietrack into a timeout.

That didn’t necessarily work out for them, though. From there on out, the Buffaloes asserted their divisional dominance over their D-II foes and wouldn’t let them get back into the game. By the end of it all, the Buffs soared to their sixth straight victory with a 95-71 finish.

The Buffaloes head next to the home of their blood rivals, Colorado State University, on Sunday, Dec. 6. Tipoff is set for noon and the game will be broadcast on the Root Sports Network.

“They gave us a good feel of what we’re going to see on Sunday up in Fort Collins in terms of a team that shoots the ball well from three, from different positions,” Boyle said. “And the only thing CSU has, they have a little better athletes and inside presence and they’re a little bit better off the dribble athletically. But Fort Lewis, they got kids that can play.” 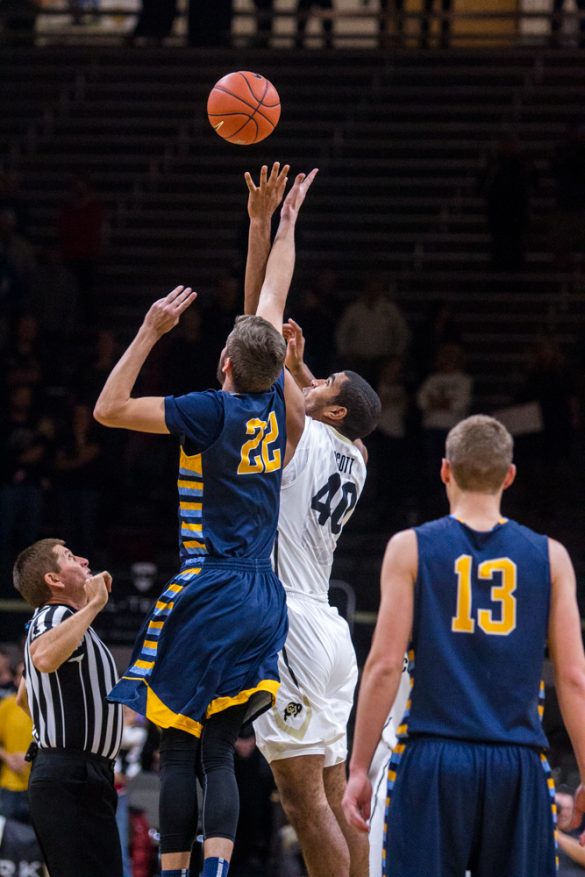 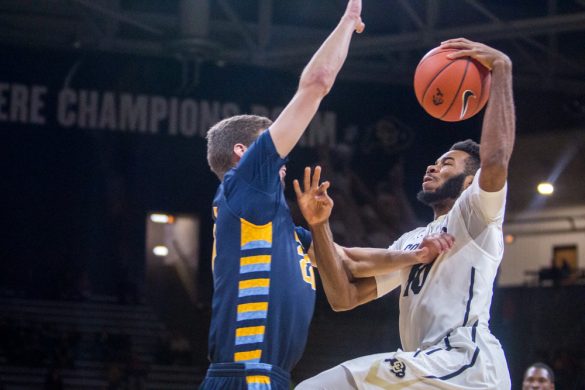 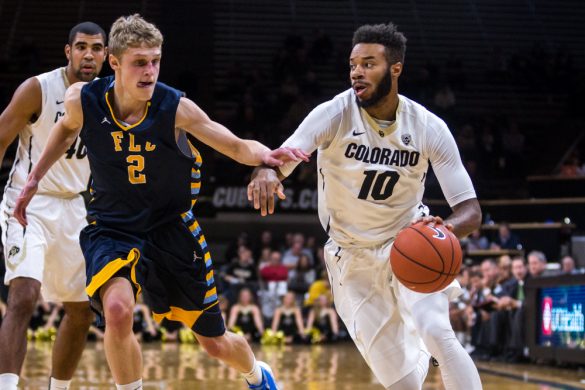 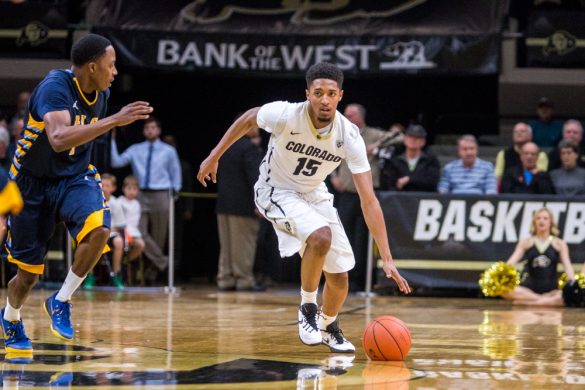 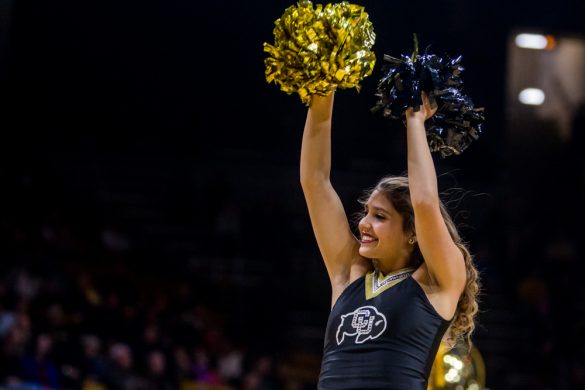 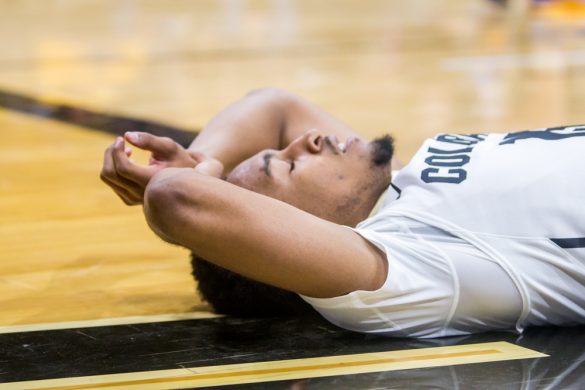 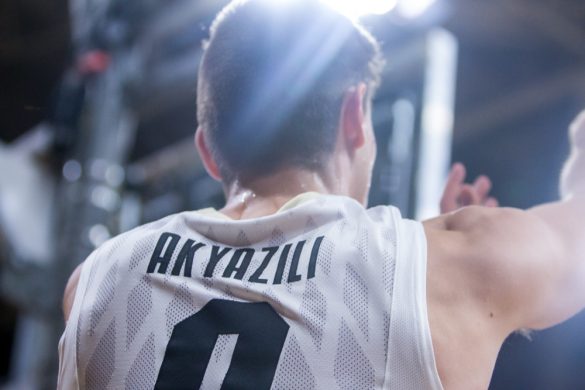 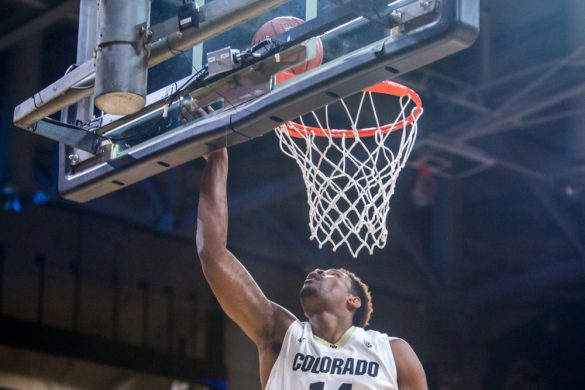 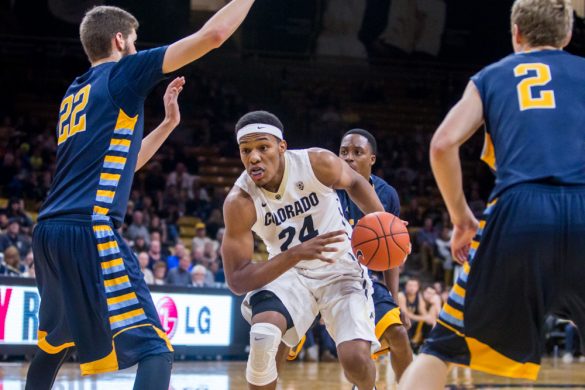 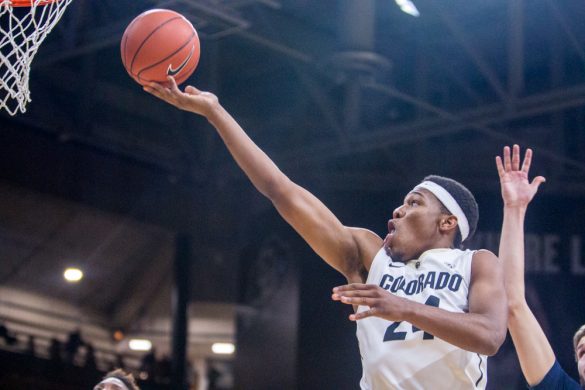 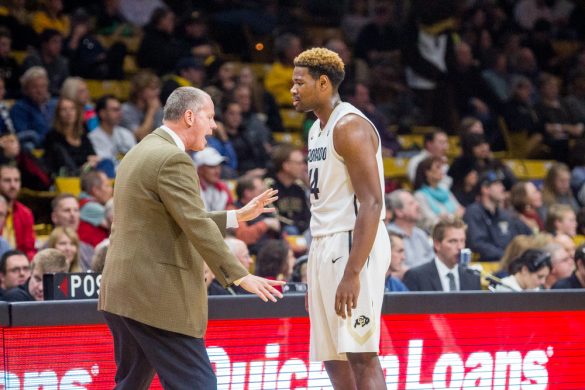 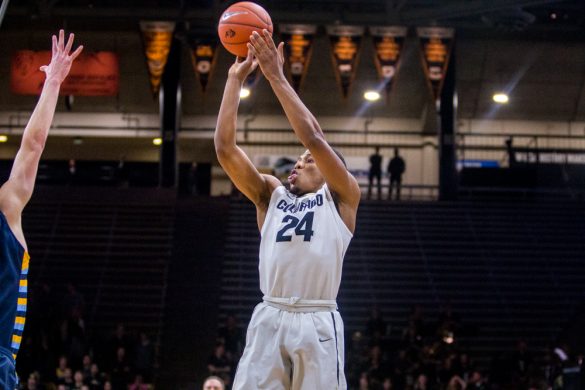 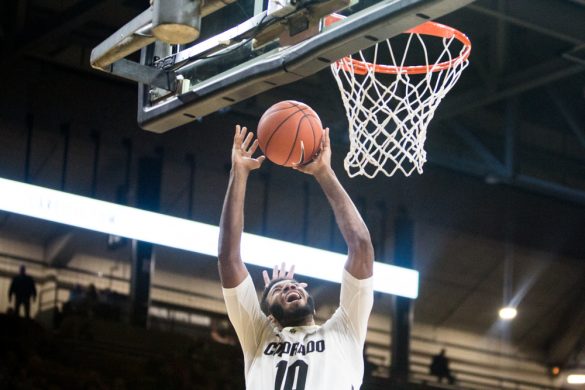 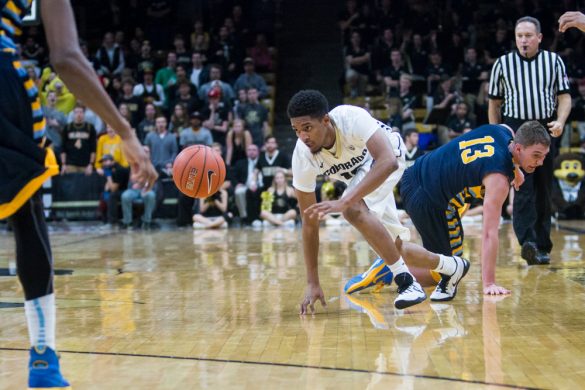 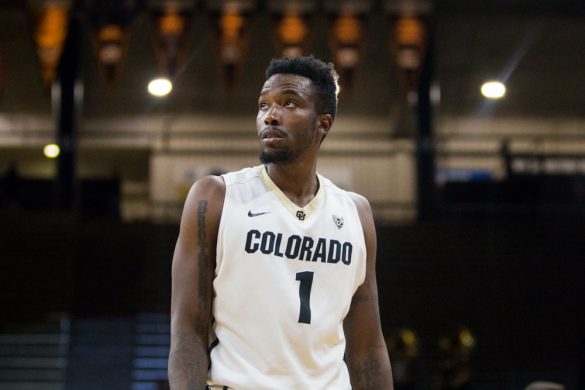 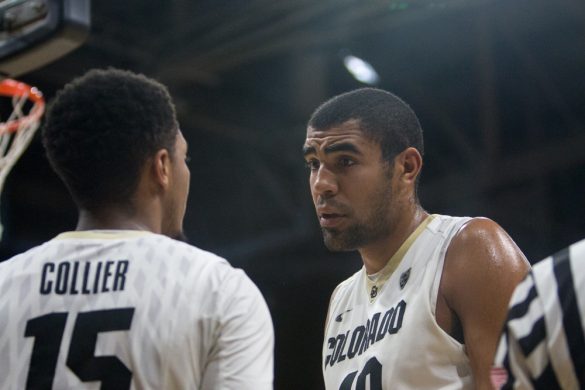 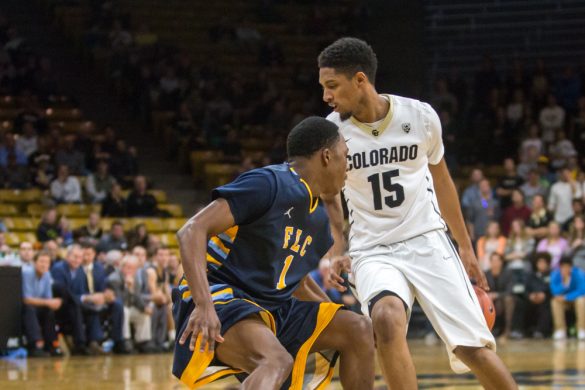 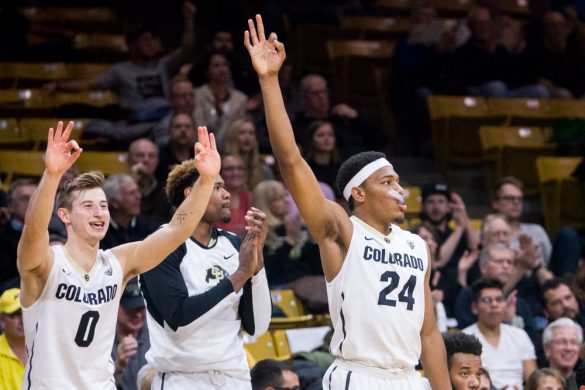 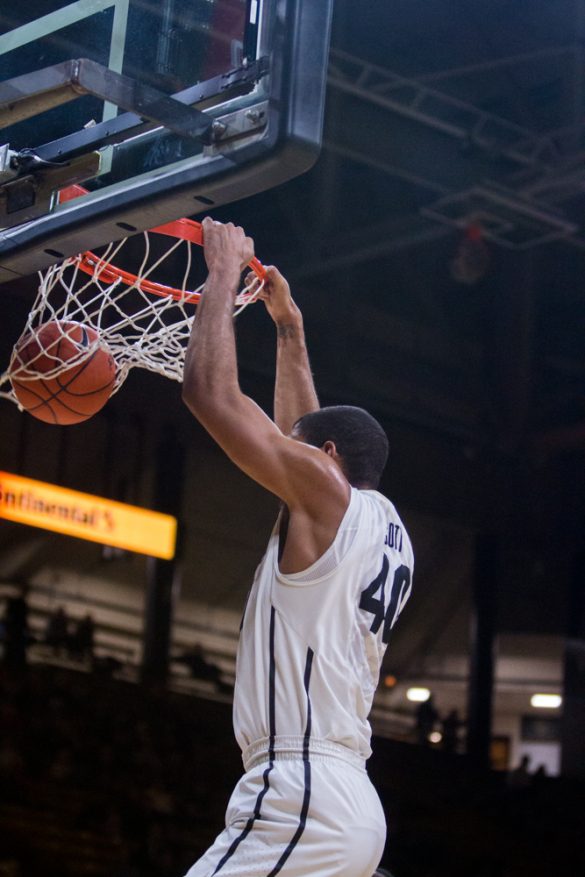 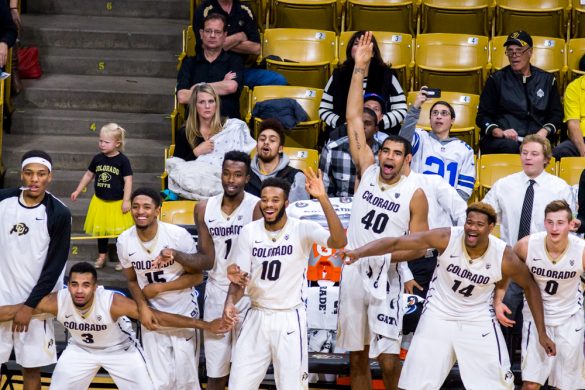