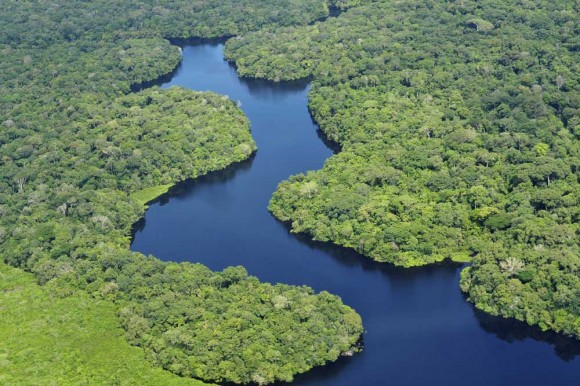 Aerial view of the Amazon Rainforest, near Manaus, the capital of the Brazilian state of Amazonas. (Photo courtesy of Neil Palmer (CIAT)/Wikimedia Commons)

If the Four Horsemen of the Apocalypse are truly projected to come in stages, the first arrived quietly sometime in the early 1990s, dutifully destroying the Amazon rainforest’s ability to take in carbon.

Besides being one of the most diverse habitats on the planet — home to over 10 percent of animal species in existence — the Amazon is doing far more behind the scenes. As a global carbon sink, the Amazon absorbs more carbon than it puts out, producing up to 20 percent of the world’s oxygen in the process. Yet, since the ’90s, the Amazon’s ability to turn carbon into oxygen has significantly declined. In fact, according to the recent eye-opening study in Nature journal, the rainforest is taking in less than half of the carbon it was in 1990. In essence, if you’ve been waiting for the “Big Red Flag” proving the immediate effects of global warming, this is it.

The root of the issue, like so many environmental travesties of today, is carbon outputs (in other words — pollution). A massive influx of available carbon has led to the trees of the Amazon attempting to take in more than they biologically can. So, to put it plainly, the trees are being overfed, and like Rosie O’Donnell, they simply don’t know when to put down the plate. As a result, the trees are maturing faster from the overstimulation and thus dying younger, effectively decreasing the ability of the forest to create oxygen.

Perhaps the most frightening revelation of the study is that other land carbon sinks, like the Boreal Forest that spreads around the Northern Hemisphere, will follow suit, “overdosing” on carbon and becoming less effective at converting our waste into clean air.

When I first came across the study in question, most of the questions from people who wished to discuss it further concerned its severity. “On a scale of one to ten,” a friend tentatively asked, “How screwed are we?” This is a typical reaction; news of this caliber often makes people feel their only option is to sell off their possessions, move to Cabo and live out their remaining days in a drug-induced stupor. After all, if the Amazon goes, and the rest of the world’s forests follow suit, to say we’ll be short of breath as a population is an understatement.

However, it is also in times of such blatant crises that humanity often comes together to find a solution. Consider, for example, the gaping hole in the ozone that became the subject of headlines internationally during the 1970s. After a 1987 international conference known as the Montreal Protocol set forth new bounds on usage of the chemical compounds destroying the ozone layer, we are now set for a complete recovery, according to the United Nations.

Similarly, if we were to buckle down as a planet and begin implementing purely green energy resources, we’d increase our chances of reversing the damage our carbon emissions have already caused. Frustratingly, many of the technologies we need to embrace are currently being used but their scope just isn’t large enough yet.

Take, for instance, the fact that an experimental hydroelectricity program in Oregon is now powering more than 100 homes at zero cost. Using turbines placed inside existing city pipelines, the project headed by Lucid Energy has startlingly positive implications if it were to be embraced on a large scale. And this is just one small example — it’s no secret that both traditional wind turbines and solar panels provide incredibly green energy.

Unfortunately, the entry costs of these energies are typically what keep people from immediate adoption. However, this perpetuates a vicious and counterproductive cycle where our reliance on fossil fuels — a hefty emitter of carbon — becomes the cheapest way to heat a home but the most expensive in terms of cost to the environment.

For us to curb the effects of our carbon on the Amazon — and potentially the rest of the world’s organic carbon sinks — we need to think forward, not present. In an era where the goal of the common individual is to achieve personal success, it can be difficult to imagine abandoning the thought that your life matters less than the betterment of the human condition overall. Yet, with such a thought process also comes unseen benefits, like the preservation of our wildlife and nature, as well as the promise that our children might breathe fresh air. Only thinking outside of our own personal environment will affect the greater one around us.