The Schanfar Side: Shifting Seasons 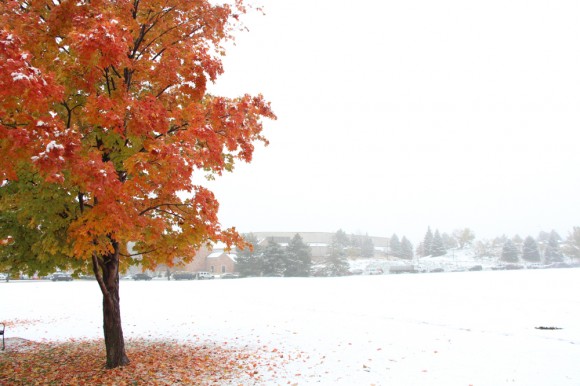 If you’ve been paying any attention to the weather this winter, you may be more tempted now than ever to side with Fox News on the climate change debate.

Indeed, it might appear that the brilliant logic of most forefront conservative commentators has finally championed actual scientific fact. With the incredible amount of February snowfall we’ve received here on the Front Range, you too may be tempted to question the warming of the Earth while you scrape feet of snow off your windshield. But if you choose to look past flash perceptions that are about as substantiated as conclusions from a glance outside, you will notice not that the seasons are growing warmer — rather, that the seasons themselves seem to be changing.

The average amount of snowfall throughout the West decreased last year — and in drastic, unlikely ways in Colorado. Yet this year, in February alone, the Front Range has experienced record amounts of fresh snow. Similarly, in Buffalo, New York, record snowfall in November came so early that the city found itself preparing for record flooding, as the proceeding warm air lay ravage to the seven feet of urban powder.

The seemingly unpredictable shifts in seasons can be as confusing scientifically as they are to the everyday person. Between the bouts this month when Boulder received its record February snow, townspeople enjoyed weather in the 60s and 70s, and were more likely to wake up to birds chirping than snow plows scraping.This is largely due to the trend in global warming that trumps secondary outcomes like the sensation of seasonal cooling. Regardless of the obliterating cold fronts that have plagued the United States this winter, the earth is still warming, and it’s beginning to affect our seasons.

According to Climate Central, a leading organization on climate change research and reporting, our world’s weather is certainly reacting to warmer temperature. Heat waves are growing longer, but so are instances of moist, extreme weather. The National Wildlife Federation describes how the heating of the earth causes shifts in seasonal weather patterns that drastically alter the destructive forces of natural disasters, as well as how in the northern U.S., spring now arrives up to 14 days earlier than it did 20 years ago.

The bottom line is, if you’re growing paranoid that the Colorado winters you remember as child aren’t quite the same fluffy consistency, you’re right to be concerned. Our global climate is inarguably shifting, and with it come the seasonal abnormalities we’ve been experiencing over the past couple decades. The snowstorms may be bigger, but they’re matched by episodes of heat unparalleled by those of the past. The floods will grow more devastating; the droughts will grow more intense. Eventually, the impact man has had on this earth will become fully tangible to the consumer who blindly supported the corporate institutions who largely contributed to global emissions.

So what can be done? Unfortunately, like the end of most discussion on climate change, not much. The United Nations predicts that with intensive societal changes, we could feasibly bring the climate to a manageable level of warmth, but only if we act within the next fifteen years. But this is hardly promising, considering that getting people to institutionally alter everything about their energy consumption and waste patterns is about as easy to do as convincing people there isn’t a God. Set in their lifestyles, the common Western constituent will continue to burn his petrol as he shouts at the sky, blindly furious as to how his summers can be so damn warm, but he’s still left to shovel record snowfalls in the winter.