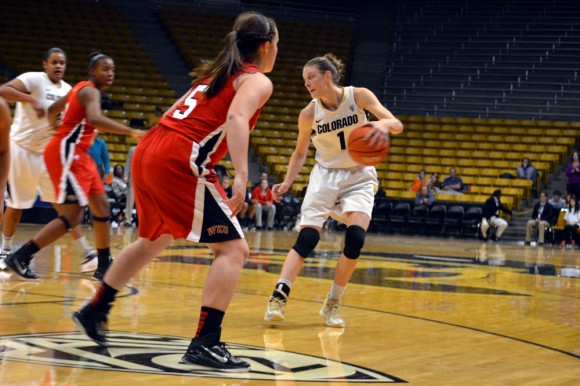 Colorado senior guard Lexy Kresl (1) swings around Western Kentucky junior guard Micah Jones (5) and makes a drive to the basket during an NIT tournament game on Monday. The game was close throughout the night, but in the end, the Buffs could not keep up for the win. (Elizabeth Rodriguez/CU Independent)

Sloppy play with 24 turnovers led to the first defeat of the season for Colorado in the second round of the Preseason WNIT tournament on Monday night in the Coors Events Center, where the Buffaloes lost in the second round to the Western Kentucky Lady Toppers 79-78 in overtime.

After sneaking by North Dakota last Saturday in a 68-59 victory, Colorado failed to overtake Western Kentucky after fighting back from a 9-point Lady Topper lead early in the second half. In the final minute of regulation, Colorado senior forward Jen Reese was at the free throw line with Colorado down 67-68 and a chance to give Colorado the lead with 19 seconds left, but she only made her first attempt before missing the second. Western Kentucky took possession and missed a shot at the end of regulation from freshman guard Tashia Brown. 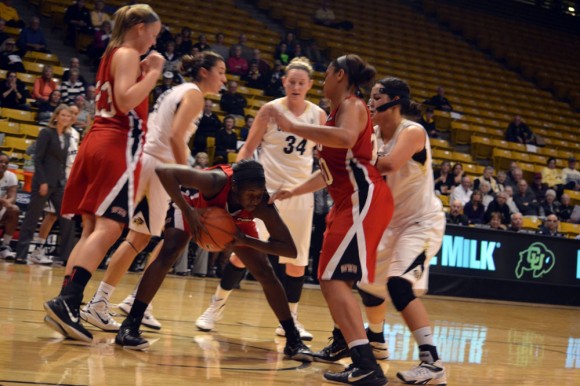 A Western Kentucky player comes down with a rebound and protects the ball from the Colorado defense on Monday night during the NIT game in Boulder, Colo. (Elizabeth Rodriguez/CU Independent)

Heading into overtime tied up at 68, the Buffaloes built up a 71-68 lead before Western Kentucky went on a 6-0 run to take a 75-71 lead with 49 seconds left in the contest. That lead grew to 77-72 before Reese made a 3-pointer to narrow the Lady Topper’s lead to two.

Following two made free throws by Western Kentucky junior guard Micah Jones, Reese was fouled on a layup and made the subsequent free throw to bring Colorado to one point down 79-78 with 20 seconds left. On the next Colorado possession, senior guard Lexy Kresl missed a layup for CU with two seconds left on the clock. Colorado fouled Western Kentucky’s sophomore guard Kendall Noble, who missed both of her free throws. But with 0.3 seconds left, Colorado couldn’t get a shot off after a clock discrepancy among the officials led to an inbounds pass from Colorado senior guard Jasmine Sborov.

“When you have 24 turnovers and give up 25 rebounds, it’s amazing that we had a shot, a couple shots, to win,”Colorado head coach Linda Lappe said.

Reese and Kresl agreed that turnovers plagued Colorado throughout the night.

“We were playing to their speed of the game,” Reese said. “We were just making bad decisions.”

“We get flustered kind of easily right now,” Kresl said. “That’s just controlling the tempo, the tempo and the pace.” 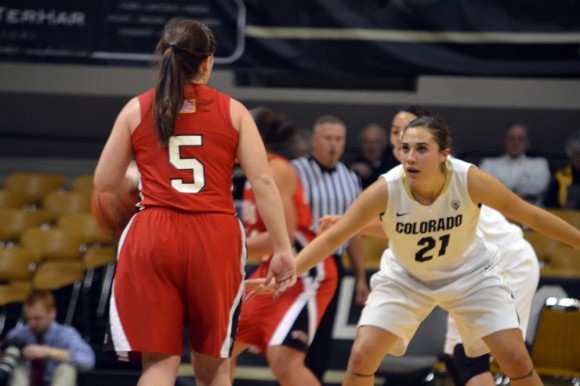 Colorado withstood a 13-turnover first half and only trailed by one point at half time. But coming out of halftime things didn’t get much better, as Colorado turned the ball over on four of their first five possessions of the second half.

Kresl came out shooting in the first half, shooting four-for-four on 3-point shots to end the half with 12 points. Heading into overtime, Kresl was the only player for Colorado who had not committed a personal foul.

Colorado took 40 free throws in the game, making 30 of them. Sophomore forward Zoe Beard-Fails managed her eight points entirely on free throws, and she made eight of 10 on the night.

Four players fouled out for Colorado, including two starters in junior forward Jamee Swan and sophomore wing Haley Smith. Sophomore center Bri Watts and Beard-Fails fouled out by the end of regulation as well, leaving Colorado thin at forward.

Colorado moves on to the consolation bracket for the team’s final game in the Preseason WNIT. The Buffaloes will host Arkansas State Saturday, Nov. 22 at 6 p.m.