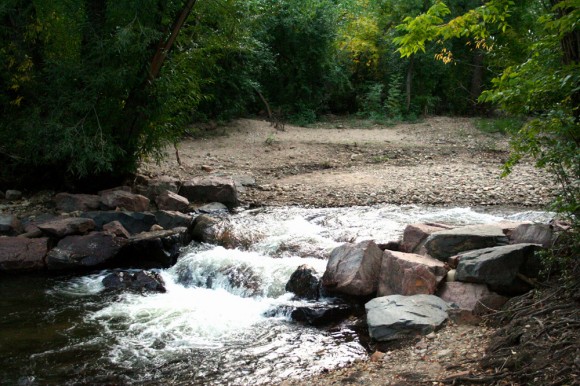 Boulder Creek, one of the most prominent landmarks in Boulder, flows just north of campus. With the EPA’s funding, there will be new technologies to make the treatment of the water more efficient and cost effective. (Allie Greenwood/CU Independent)

“In order to create more natural and cost-efficient water treatment systems, we’re focused on improving how these systems are implemented, as well as developing technologies that don’t require any chemical addition,” said Professor R. Scott Summers, director of DeRISK and an engineering professor at CU.

Hundreds of various contaminants are legally discharged into rivers and aquifers across the United States every day, causing harmful chemicals to flow into drinking water.

“This center will facilitate public health for the rural communities that don’t have access to low-cost treatment options,” Summers said.

DeRISK has two major focuses — a front end of outreach and ease of communication, and a back end of developing non-conventional technologies for public use.

“Part of what we’re doing is evaluating sustainability,” said Elizabeth Shilling, a 22-year-old graduate student researcher and environmental engineering major. “This includes the cost of building facilities, the ongoing cost of operations, and also environmental factors — waste and emissions management.”

It’s more difficult for rural communities to afford the scientists and technicians that larger urban water treatment facilities employ. But other resources, such as cheaper and more plentiful land, put some rural communities in a unique position over cities to benefit from non-conventional water purification systems.

Examples of non-conventional systems that minimize overall costs include using the sun’s ultraviolet radiation to purify water in ponds, or using bacterial filters that reduce chemical contaminants. Conventional water treatment includes methods like water chlorination, which may be right for some communities, but produces chemical byproducts.

Most importantly, DeRISK is developing a uniformed approach to make it simpler and more affordable for rural communities to implement the water treatment technology that suits their environment. Small towns might have miles of pipeline between two houses, so water quality is more likely to degrade in rural areas as it stagnates in the pipes and develops bacterial contaminants.

“In order to make it easier for smaller drinking water plants to figure out the best treatment system for their parameters, we’re developing a sustainability index,” Shilling said. “Basically, it will show these small town facilities which technology would be best for them in terms of long term costs and environmental impacts.”

One of the many goals of DeRISK is to develop technologies that can be installed in the distribution systems themselves, instead of in centralized water treatment facilities, which is the solution typically utilized across the United States. This would ensure that water remains drinkable no matter how far it travels from the primary treatment center.

“We see it as a service to public health,” Summers said. “So that when you stop at a gas station someplace out in the country and you drink from the water fountain, you won’t have to worry if the water’s safe to drink, because that gas station could double as a water treatment facility.”