CU students encouraged to “Be Boulder” 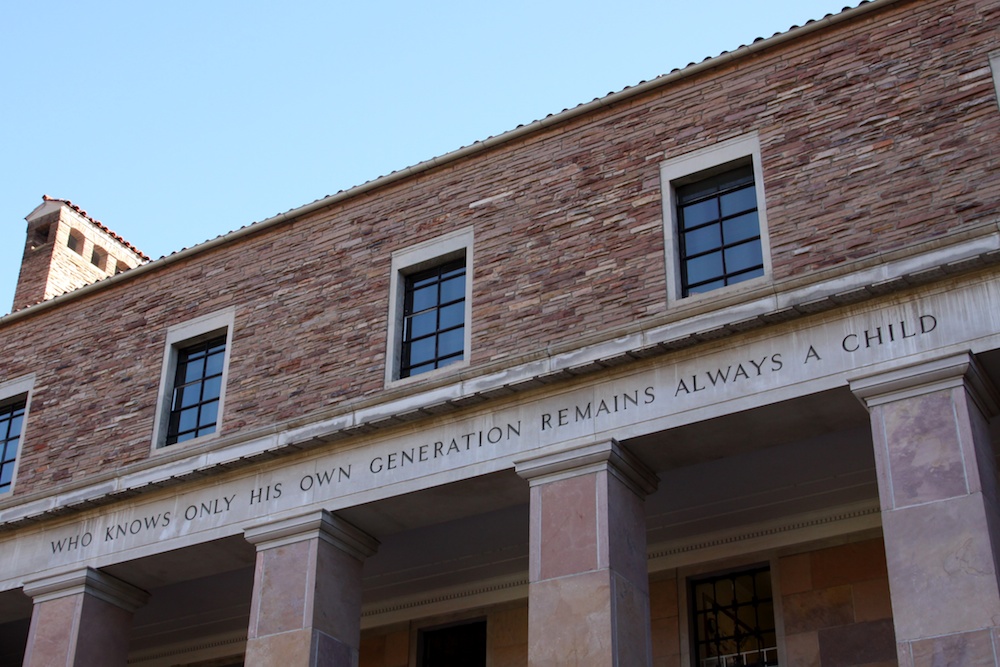 Norlin Library reads, “Who knows only his generation remains always a child.”  The “Be Boulder” campaign places an emphasis on shedding the “party-school” image CU has gained in recent years by highlighting the academic research done here. (Bryan Borenstein/CU Independent File)

CU Boulder has adopted a new brand for the university around the phrase “Be Boulder” in an attempt to make the slogan synonymous with the campus and its mission of academic success.

CU’s director of strategic marketing and web communications, Jon Leslie, said the university needed to have an overarching message to improve both internal and external university communications. Leslie said CU was in need of a re-branding initiative because its “party-school” image was taking away from the school’s research and academic merits.

“We are a higher quality academic institution than we are generally known for,” Leslie said.

The development of the “Be Boulder” campaign began in July 2012 with the convening of a “Strategic Marketing Alliance” consisting of administrators from university communications, alumni relations, athletics, admissions and academics.

Will Kubie, CU’s strategic brand manager, said the goals that the SMA tried to accomplish were distinguishing CU as a comprehensive research university, being consistent and dynamic in messaging, engaging the community and alumni and shifting the perception of CU while staying true to the university.

The SMA decided they needed outside help, enlisting Pentagram, a design firm in Austin, Texas, to help come up with an idea that would meet the aforementioned goals. A few weeks later, Pentagram came back to the SMA with a new direction: “Be Boulder.”

“Be Boulder” tested much better with focus groups than the other concepts the SMA had come up with. According to Kubie, people associated CU with hard-partying celebrities like Lindsay Lohan and Charlie Sheen before they saw the “Be Boulder” campaign, and with academics and businesspeople like Steve Jobs and Albert Einstein after the campaign’s rollout.

The implementation process of the campaign has been slow thus far, but is looking to pick up in the near future. Many different campus groups are beginning to show interest in “Be Boulder,” including career services and the engineering college. These programs can choose to jump-start the adoption with a half-hour session given by Leslie and Kubie. There’s even an 89-page “Be Boulder” style guide available on the “Be Boulder” website.

“We’re encouraged by the early adoption, for sure,” Leslie said.

The project is set to cost CU-Boulder about $173,000, according to Leslie, and he stressed that no “new” money was used in the process. Instead, the university took existing funds from its marketing budget and diverted them from other areas to the campaign. Leslie said there will most likely be an ad campaign and architectural signage by Craftsmen for “Be Boulder” in the future.

There are a number of initiatives in place to help spread “Be Boulder” to the student ranks, including a “Be Boulder” week that is being put on by the CU student government’s freshman council, according to CUSG director of communications, and current SMA member, Lauren Cross.

“We have to actually be bolder to ‘Be Boulder,’” Kubie said.

“Anger, then sadness”: Community members grieve in the wake...

What you need to know about campus closures and...