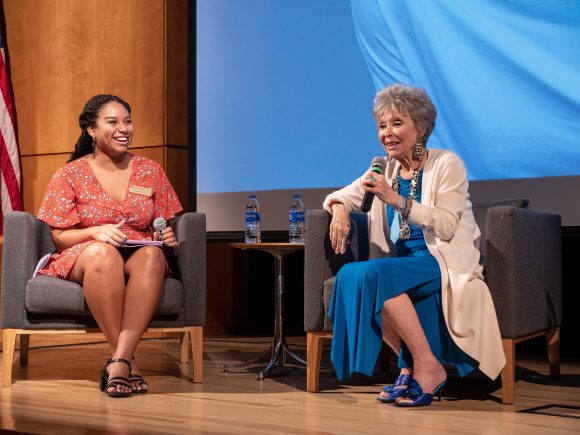 Rita Moreno discusses her life and career with the CEB at the University Memorial Centre’s Glenn Miller Ballroom. Sept. 20, 2022 (Courtesy of Patrick Campbell, University of Colorado)

On Tuesday, Sept. 20, CU Boulder’s Cultural Events Board held a conversation in the Universal Memorial Center with actress, singer and activist Rita Moreno. Moreno’s career has spanned over seven decades and 40 feature films. She is one of only 17 individuals to win the prestigious series of EGOT awards- the Emmy, the Grammy, the Oscar and the Tony.

Moreno has long been viewed as a Hollywood icon, but she spent years being overlooked or pigeonholed by studios. Moreno explained that visual representation of Latinos in films was very limited and she grew up with a very warped perception of her own identity and value as a person because of it.

“It involved a great deal of pain and disappointments and hurts and being very defensive about who I was for a very long time,” she said.

Glamorous, funny and blunt, Moreno guided the audience through the trials and tribulations of her long career. Moreno’s first big break came at only 13 years old with her Broadway debut as “Angelina” in Skydrift, and she has since appeared in projects across the entertainment industry. Opening up about her mental health struggles, the actress explained that despite gaining success, undoing the damage that discrimination did to her self-worth took a lot of work.

“The best thing I ever did for myself ever–ever–was to go into psychotherapy because I was such an unhappy, miserable, sad, angry young woman for a very, very long time,” she said.

The actress noted that it was her then-boyfriend Marlon Brando who encouraged her to seek help, which made the audience roar with laughter

“It kind of amuses me because it was one looney telling another that she needed help, and he was right,” she said.

Moreno is perhaps most well known for her Oscar-winning performance in 1961’s “West Side Story.” The actress was invited back as an executive producer for Stephen Spielberg’s re-imagining of the film, released last year.

“[Spielberg was] determined that this time around, that respect would be shown to the Hispanic actors who were playing the sharks,” Moreno said. “The first version–which, by the way, I loved–was very of its time.”

In the original film, Moreno was one of the only Puerto Rican actors to play a Puerto Rican. However, while strides in representation and inclusion have been made since the film’s release, Moreno believes that Latinos are still severely underrepresented in the entertainment industry. The newest Hollywood Diversity Report from the University of California Los Angeles revealed that only 7.7% of acting roles are given to Latinos despite having the highest per-capita theater attendance among all ethnicities in the US.

“It hasn’t changed as much as we had hoped,” she said.

Moreno weaved in scandalous stories and funny anecdotes in between these profound observations. She spoke of themed birthdays, football stars’ locker rooms and even her brief affair with Elvis Presley, all the while never missing the opportunity to embarrass her grandson, Leeds School of Business graduate Justin Fischer, who was sitting in the front row.

The actress also discussed her documentary, “Rita Moreno: Just a Girl Who Decided to Go for It,” released on Netflix in 2021. In the film, she discusses her involvement in political activism.

One of the event’s attendees was CU Professor Ernesto Acevedo-Munoz, author of the bestselling book “West Side Story as Cinema: The Making and Impact of an American Masterpiece” and member of the Community Advisory Board that worked on Spielberg’s re-imagining of West Side Story.

“West Side Story is a very delicate property,” he said. “On one hand, it’s been a favorite– now, it’s in its third generation of fans. And yet, we all also recognize that there are these sensitive, sensitive issues, particularly regarding race, and gender as well, that could be addressed.”

The Community Advisory Board was part of the producer’s effort to consult communities that were misrepresented in the 1961 musical. Despite not receiving credit in the film for his work, Acevedo-Munoz says the experience was a positive one.

“I’m very happy with the corrections that they made to these historical wrongs,” he said. “Rita Moreno is a real fighter and that fighting spirit is something that has not only kept her visible and busy, but has kept her name in our mind’s eye all these years.”