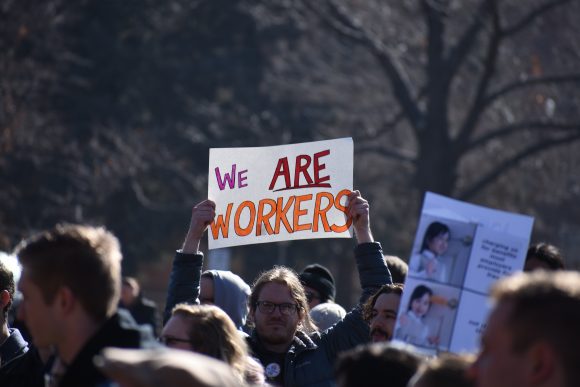 Their call to action isn’t anything new. Graduate students have been fighting fees for years. From sit-ins and protests in 2019 to protests in 2020 to an email campaign in January of this year, this fight isn’t over.

“We wanted to elevate to the next step, which is Chancellor DiStefano, and make sure that he’s aware that this is an issue,” said Kylen Solvik, a doctoral student of geography and an organizer of this campaign.

In January of 2021, the group organized a similar campaign encouraging supporters to email Dean Adler, CU’s graduate school dean, demanding an end to mandatory fees. Adler responded publicly, pointing out key actions taken in support of graduate students including the elimination of a number of fees and an increase in overall base stipends.

“We acknowledge and embrace the many roles (graduate students) play, including the roles as research and teaching assistants, while also recognizing the relationship between graduate students and the university is primarily educational,” Adler said in his response.

Despite this, graduate workers are still concerned that their position as employees isn’t being taken seriously. Their position at CU is not only an educational one.

The call-in campaign kicked off at the beginning of this week’s Graduate Student Appreciation Week. But many graduate student workers felt that the CU could show its appreciation in a different way.

“I don’t need to go to campus for free coffee and breakfast pastry or what have you, I would like a fee waiver,”  Solvik said.

“I mean the mindfulness seminars and glute and core classes are cool, I guess, but it’s really rich for the university to sort of offer all of these sort of vacant gestures while actively undercutting the material well-being of graduate students,” said Anna Kramer, a doctoral student in the history department.

The issue extends beyond this one week of wellness and appreciation. Graduate student fees matched with the high cost of living in Boulder put immense stress on graduate student workers. This financial burden also means that it can be hard to access support for mental health.

Kristen Eller, working on her Ph.D. in chemical and biological engineering, explained that she started going to therapy during graduate school, because of graduate school.

Physical health is similarly concerning. Fees, which can be as high as $1000-$2000 yearly according to UCWC, can have major impacts on graduate student finances when it comes time to pay them.

“(Graduate students are) sort of crossing their fingers that no health issues come up, no unexpected doctor’s visits and sort of no surprise expenses at that time because it’s just a hard clump of cash to recover from handing out,” Kramer explained.

Eller dealt with this personally.

“I just hurt my back randomly,” she said. “The student fees came to mind because it was like I know I have all these bills lined up.”

Boulder students and employees have struggled for years with the high cost of living. Graduate workers are no different. Grappling with student fees, making near minimum wage and often working over 60 hours a week, Graduate students have to share multi-bedroom houses, work second jobs or depend on a partner just to make ends meet.

Not everyone has the advantage of the support of a partner or a financial safety net. This could become an issue for CU and limit the number of prospective graduate students. Going into graduate school, prospective students look at a combination of factors including the cost of living, student fees and stipends.

Eliminating fees could go a long way in helping the Graduate School achieve its goals for creating more diversity.

“(Waiving fees) totally shifts the faces that undergraduate students see on campus and the faces they see teaching their classes and I think it’ll go a long way to make you know more welcoming space, not to mention the longer-term impacts on research and academia,” Solvik said.