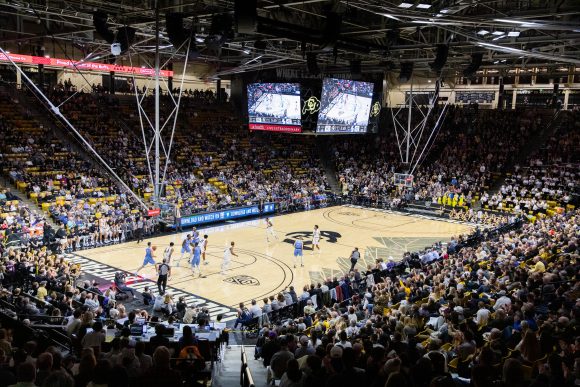 On Thursday the Pac-12 CEO Group reversed their decision to postpone athletic competition through 2020. Football will now return in early November and men’s and women’s basketball are scheduled for Nov. 25. University of Colorado head coaches shared their eagerness in a videoconference soon after the news broke.

While Sept. 24 came with positive news for athletics, the situation was complicated earlier in the day when Boulder County public health officials issued a self-isolation order for 18 to 22-year-olds in the City of Boulder.

CU football had been practicing twice a week in September, but the Buffs are now on hold with the public health order. Other Pac-12 football programs were cleared to begin practice immediately and the official start date for men’s and women’s basketball practices has not been announced.

As of Sept. 29, the restart of football practice in Boulder is still unknown, but CU head football coach Karl Dorrell is optimistic the roller coaster ride will end at Folsom Field soon.

“We’re excited to play this fall,” Dorrell said. “We were very hopeful that this might occur even with the decision that was made earlier in August. We always had hope about things that can change when the climate gets better… I know as a team and as a football program, we’re ready to go. We have a lot more focus and attention now that there will be a schedule.”

For head women’s basketball head coach JR Payne, the Nov. 25 start date brought a much needed boost in morale for her Buffs.

“I definitely can feel an emotional lift in our team,” Payne said. “We were disappointed when we heard (a) January (return) and we were hopeful that this day would come. We’re very excited. We’ve been training given the parameters of small groups and no contact. We’ve been training really hard and I’m very very excited about our ballclub, and I think they’re equally excited to know that there is now an official date that we will not only compete against ourselves but compete against other people.”

Men’s basketball head coach Tad Boyle was outspoken in his frustration with the Pac-12’s original verdict in August. Boyle expressed empathy for Dorrell’s unusually quiet fall during his first-year leading Colorado and thanked CU Chancellor Phil DiStefano and Athletic Director Rick George for doing their best to bring sports back at CU.

But most importantly, Boyle was happy for his student-athletes.