Florida, Connecticut, Wisconsin and Kentucky have done it — what 351 college basketball teams dream of. The Final Four has been decided, and AT&T Stadium in Arlington, Texas will be the grandest of stages.

This year’s Final Four surprised fans and analysts alike, except for top-seeded Florida. If you filled out a bracket, chances are it’s completely busted. In ESPN’s Tournament Challenge, only 612 people correctly picked the Final Four teams out of over 11 million submissions. 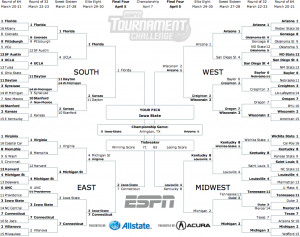 Amazingly, the bracket I filled out is still better than 62.8 percent of all other submissions on ESPN, despite missing a plethora of picks and only having one correct Final Four team. That is how crazy this tournament has been.

After all the madness up to this point, let’s take a look at the teams that survived.

The Gators’ advancement to Texas surprised no one. Florida is on a 30-game winning streak, breaking the previous school record, and the SEC’s overall performance in the tournament makes that feat all the more impressive. But as luck would have it, the last team the Gators lost to was the University of Connecticut…and they face the Huskies on Saturday.

If successful in eliminating the Huskies, Florida could possibly face Wisconsin in the final. Coincidentally, the Badgers handed Florida its only other loss this season. So despite their pristine record, the Gators still have something to prove.

Florida does not lack experience — three of their four leading scorers are seniors. The Gators’ current leader on the floor is senior guard Scottie Wilbekin, who is touted as one of the nation’s best one-on-one defenders. Florida ranks third in the country in points allowed, and Gators head coach Billy Donovan has already won two championships with the team.

If the Gators win, it would mark the third year in a row that the overall No. 1 seed has won the tournament.

How did the Huskies shock the world? The answer lies in senior point guard Shabazz Napier’s performance. He leads the team in points, assists, rebounds and steals. Napier has helped the Huskies become first seven-seed to make it to the Final Four since the tournament expanded in 1985. UConn’s run this year is eerily similar to its 2011 campaign, when the school won the tournament behind Husky legend Kemba Walker. Napier will have to emulate Walker for the Huskies to take down Florida, but U-Conn will have confidence as one of the only two teams to take down the Gators this year.

Head coach Bo Ryan has finally led his team to a Final Four after some disappointing tournament performances in the past. This is the Badgers’ first appearance since 2000. Wisconsin has recently become known as a defensive team, but junior forward Frank Kaminsky has contributed some much-needed offensive firepower. His 28-point, 11-rebound performance in the Elite Eight helped the Badgers clinch an overtime win against Arizona. Coach Ryan’s father, Butch Ryan, died last September, and the team has claimed his memory as a major inspiration going forward.

Everybody knew the Wildcats had NBA talent, but few expected this freshmen-led team to play like they have throughout the Big Dance. Kentucky has had the most difficult road to the Final Four, with wins over previously undefeated Wichita State, in-state rival Louisville, and last year’s runner-up Michigan. Freshman phenomenon Julius Randle leads the Wildcats in scoring, and is expected to bolt to the NBA Draft this summer along with some of his teammates.

Kentucky has both gelled into a dominant team and peaked at the right time. It seemed that head coach John Calipari’s strategy of using one-and-done players may have backfired early on, when his team unexpectedly struggled after being selected as the the pre-season No. 1 team. He has proven his critics wrong. A final appearance, or even a championship, would certainly silence them for good.

Florida is the favorite to win it all. While a U-Conn win over the Gators would be a monumental upset, Kentucky beating Wisconsin would be less of a surprise, considering how well the Wildcats have done against top competition. The opening lines in Las Vegas even have Kentucky as two-point favorites over the Badgers, which is unprecedented for such a low seed (8) against a much higher-seeded Wisconsin team (2).

If Kentucky and Florida meet in the final, it would the fourth meeting of the teams this season, with the Gators winning all previous matchups. Considering how crazy the tournament has been so far, it might be best to hold off on predictions and enjoy the greatness that is college basketball’s biggest stage. After all, anything can happen.