From Seoul to CU: Korean artist creates landscapes out of steel powder calligraphy 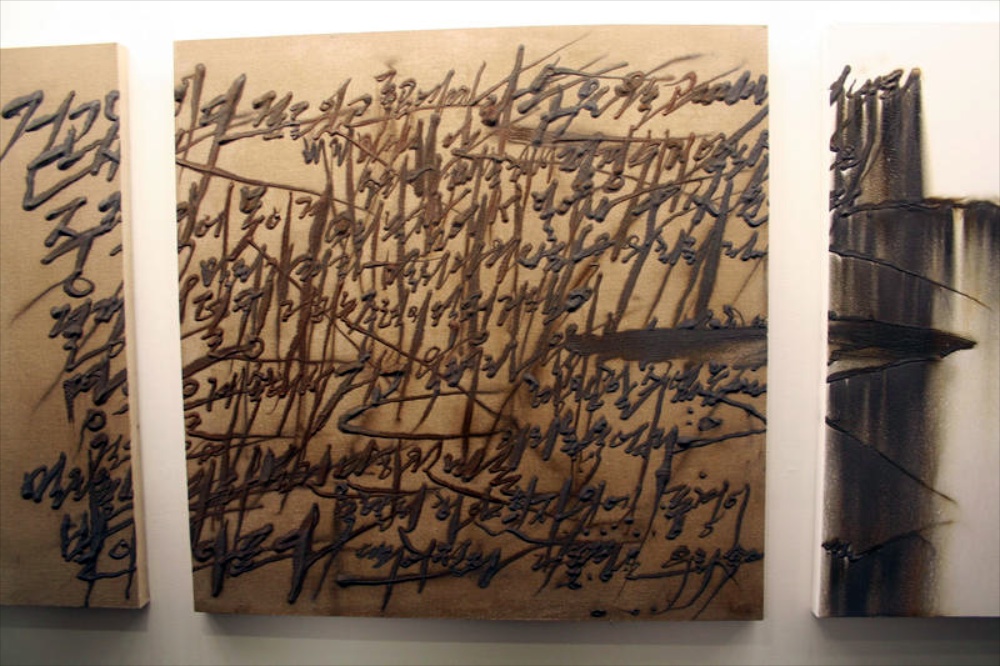 A piece of Jongku Kim’s artwork hangs in the Visual Arts Complex. Kim gave a performance followed by a lecture  as part of the Visiting Artist Series Tuesday, Feb. 11, 2014. (Allie Greenwood/CU Independent)

Standing shoeless atop a canvas on the floor, Kim Jongku, a sculptor, painter and poet from South Korea, dribbles and dabs fine black powder into poems of calligraphy. A video camera at his feet projects a backdrop of shadows, a mountain landscape made from the steel poem piled below him.

The VAC lobby has been Jongku’s studio during his two-week residency at the CU Boulder Department of Art and Art History. On Tuesday, Feb. 11, a performance, lecture and panel discussion hosted by the visiting artist and University Libraries exposed audiences to the metallic creations of Jongku.

“Watching him work, I didn’t expect a landscape to appear,” said Amorina Martinez, 22, a senior studio arts and environmental studies major. “But it dawned on me that he created two perspectives, one through a top-down view and one through the perspective of the camera.”

Grinding and sculpting form the body of Jongku’s work, but the steel residue left over from grinding metal is often wasted by sculptors, the artist says. This is a medium that can pile, flow and rust, with the addition of water, into detailed patterns that dribble along non-greased canvases. 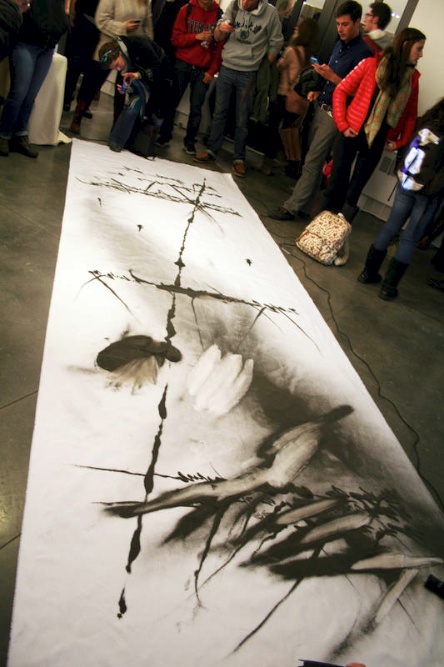 “Colors sometimes get simplified into singles,” Jongku said. “But there is no single black, or brown. With so much detail and texture in these dark powders, they get to make their own colors.”

The crowd listened attentively to as he recounted the experience of his transition from sculpting to painting to poetry, which eventually led to him to the distinct medium of steel powder calligraphy.

Attendees of Tuesday’s performance included Cameron Ledingham, a 22-year-old senior geology major, who was impressed with the artwork.

“During his performance I got the feeling he was modeling creativity for us, especially because the room was so silent,” Ledingham said. “He was doing something so simple but seemed to be captivating our attention.”

Others found the lack of color in Jongku’s art too stark and wanted more from his work.

“I enjoyed the videos of his sculpting, but his work was very simple, and monochromatic,” said Quynh Mai, 18, a freshman communications major. “As he builds a mountain or landscape out of his powder, I think to myself I want to feel what the artist feels, or at least a stronger impression.”

Jongku’s residency at CU began on Feb. 3 and will end on Feb. 14 with an exposition called “Kim Jongku: Steel Powder Painting and Landscape.” The exhibit will showcase the works created during his campus residency and will open from 5:30 to 7:30 p.m. that evening. His artwork will remain on display in Macky through March 30.